Combat, Transforming into a vampire

Sion Eltnam Atlasia is a heroine from Tsukihime who is a member of the Eltnam bloodline. She is the main heroine of the story mode of Melty Blood and Melty Blood Re-ACT.

She was voiced by Rio Natsuki in the anime and Satomi Akesaka in the video game.

Originally named Sion Eltnam Sokaris, Sion is an alchemist of Atlas located in Egypt, one of the three main branches of the Mage's Association. She is a genius scientist, given a position equal to the representative of Atlas at an extremely young age. This event gave her the name of Atlasia, allowed to be used only by those who were the head of the Atlas. She is presently being chased both by the Church organization and Mage's Association. This is because in the earlier period she assisted the Church on an assignment to demolish a vampire, but it was unsuccessful and everyone got slaughtered with the exception of her. This vampire, Night of Wallachia, was the one who made her into one of his kind. She never returned to the Mage's Association from that day on and her pursuit had began. The effect wasn't as physically powerful, surprisingly she regained control of her body after the vicious attack. Now she feels a constant thirst for blood, and is searching for a cure before she becomes a vampire. She enters Shiki Tohno's town during her search for Arcueid Brunestud, hoping that she may know a cure for vampirism, to turn her back into a human once more. She is also seeking out the vampire Wallachia to take revenge, who turned her into a vampire.

Sion is frequently composed and calculating, always determined for perfection. She is, in fact, moderately emotional and enormously easy to set off. She is a self-satisfied character, but whenever Shiki makes a remarkable statement, she gets displeased. Although she had lived most of her life in isolation, she gained her first true friend in Shiki.

Sion has a long bright purple braided hair with a white skin and purple eyes. She uses a white skirt with a pair of purple shoes and purple pantyhose, and also uses a purple blouse with the symbol of Atlas and a purple hat with the same symbol. Around the neck, Sion use a mustard scarf, and around the pulses she uses a pair of bracelets.

While in her vampire form, her skin is pale and the eyes change to red. The color of her clothes is brown, and over her body some veins are exposed.

In Carnival Phantasm Episode 2, she wears purple bikini at the beach volleyball scene.

Sion is the heroine of Melty Blood, the game in which she first appears.

In Episode 2, Sion, alongside Akiha and Hisui, play volleyball in a match for Shiki. She also shares a segment together with Satsuki and Riesbyfe, called "The Back Alley Alliance" when Riesbyfe ignores Satsuki and often Sion has to stop them by saying the phrase "All according to my calculations". In Episode 12, she was apparently one of Shiki's dates and he was supposed to take her to the amusement park, but he forgot. She finally appears at the Ahnenerbe party together with Satsuki, Riesbyfe, Arihiko and Archer as they hear Riesbyfe singing karaoke.

It should be noted that Sion often says that everything was according to her calculations, even about the smallest things. She even pretends she knows about things she really does not know at all.

Sion appears as a playable character in the game UNDER NIGHT IN-BIRTH under the name Eltnam. She is slightly different from her Melty Blood appearance.

Sion refined a special ability during her studies at the Atlas Institute: she can essentially "overclock" her brain, allowing her to forecast future events through mathematical calculation. She can also "split her brain" allowing her to run it in a parallel manner by separating her thought process, an ability dubbed "Memory Partition". She inherited the ability to "hack" other peoples minds with her "Ethelite" whip. In addition, if attached in the right way, this cord allows her to control other people's bodies. In her TATARI form, she can also use Ethelite to create a phantom-like copy of an individual that is able to reproduce his or her abilities to an extent. She, as the successor of Tatari, has the ability Terror News, which utilizes physical Malignant Information actualized through prana. She possesses Ethelite, a portmanteau of Ether Lite, which is a monofilament created by the Eltnam family. Though she wields it as a whip, its actual purpose is to provide mind reading capabilities to its owner. After making contact with the skin of the target, it will connect itself to his mental nerves and establish a mental link between him and the user, giving its her family the nickname of “spiritual hackers”. Its use however, carries the risk of “reproduction of knowledge”, which would casue memories and feelings to be shared. Ethelite is condemned even in Atlas for its potential of “stealing the lives of others”. Sion also possesses Barrel Replica, a Mystic Code that is a replica of Black Barrel. It is a Conceptual Weapon of "natural life" that puts outs a toxin in proportion to that life form's natural life span. Sion's Arc Drive uses this Barrel Replica, but it seems that it's normal power hasn't been utilized. Barrel Replica Obelisk, Sion's Last Arc, emits power laterally, but in order to prevent herself from being blown off by the recoil, she anchors her body with Etherlite. Though it is incapable of wiping out Night of Wallachia, it can hamper the program by many years. 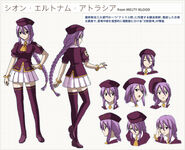 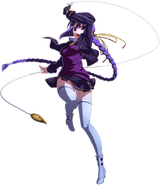 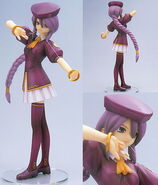 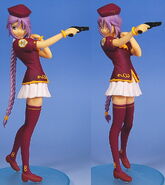 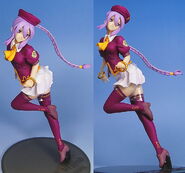