Heroes Wiki
Register
Don't have an account?
Sign In
Advertisement
in: Articles under construction, Male, Anime Heroes,
and 18 more

Pokemon: Lucario and the Mystery of Mew

Sir Aaron is a character in the eighth Pokemon Movie: Lucario and the Mystery of Mew. Years ago before Pokeballs were created he saved his Queens kingdom from a destructive war by sacrificing himself by transfering his aura to Mew.

Sir Aaron wore a cape, gloves, have boots and a hat.

Sir Aaron is revered as a paragon in Rota's history. As a result, his qualities of strength and courage continue to be celebrated in Rota's annual Guardian of the Aura festival. Lucario initially thought otherwise when he first emerged from his scepter, though he later came to understand the circumstances behind his former mentor's sacrifice and regained his respect for Sir Aaron.

Lucario's reflections revealed further insight into Sir Aaron's affable personality. He was vigilant in his Aura training and extremely dedicated to the cause of peace. Sir Aaron took time out of his training to relax, which he said would help him remain focused and composed in his line of duty. 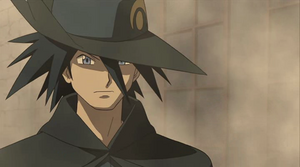 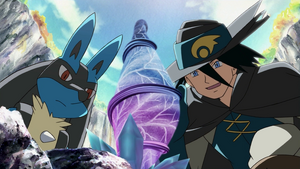