Heroes Wiki
Register
Don't have an account?
Sign In
Advertisement
in: Kirby Heroes, Video Game Heroes, Pawn of the Villain,
and 15 more

Supporter
Sir Kibble is a character in the Kirby series of video games. In many of his appearances, he is an enemy which grants Kirby the cutter ability, however, if befriended, he can be a hero in Kirby Super Star, its remake and Kirby Star Allies.

Sir Kibble appears to have a similar body structure to Kirby, having a spherical body shape and stubby arms and legs. However, he is covered in armour, mostly golden, with red gloves and silver feet. Atop his helmet, there is a hole where his main weapon is stashed: a curved, golden, boomerang-like 'cutter'. If he becomes a helper in Kirby Star Allies, he will also wear the traditional cutter hat.

Sir Kibble is a true force to be reckoned with. His cutter can take out any ability Kirby is using, break through stone and be charged up before throwing to fire a larger cutter. he appears to have good physical prowess, too, as he can use his cutter as a melee weapon when he uses Final Cutter. In this move, Kibble slashes his opponent 3-4 times, before firing them up in the air and sending them careering back down to Earth.

Sir Kibble has a myriad of weaknesses. he can be killed off by sliding twice, inhaling, or using any copy ability attack apart from Sleep and Copy. Additionally, when he is a helper, he has the same HP as Kirby and can be killed by the same things. 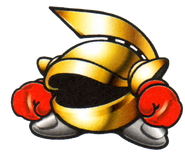 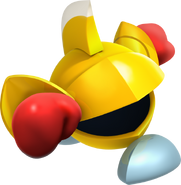