Heroes Wiki
Register
Don't have an account?
Sign In
Advertisement
in: Spoilers, Articles under construction, Adventurers,
and 35 more

To prove his worth to the English Adventurers Club (formerly)

Sophisticated Adventurer
Sir Lionel Frost is the main protagonist of Laika stop-motion animated film Missing Link. In the film Sir Frost is a crypto-zoologist during the 1880s Great Britain, yearning to prove his worth as a member of the English Adventurers Club, but is always turned down by the club's leader, Lord Piggot-Dunceby, for his unorthodox belief in evolution and the unknown creatures of myth. His luck finally changed after receiving a letter that confirmed the existence of the enigmatic Big Foot of the United States. From then on Sir Frost meets up with the film's deuteragonist, the eponymous Missing Link/Susan, who asks of Sir Frost to take him to the Hymalayes in order for him to live out his life amongst the Yeti.

Sir Lionel Frost is voiced by Hugh Jackman, who also starred as Wolverine in the X-Men film series and also voiced Roddy in Flushed Away.

For several years, if not decades, Sir Lionel Frost had been studying zoology and mythology, especially the myths surrounding fantastic creatures, which lead to him becoming a crypto-zoologist and an adventurer. He would spend several years searching for such creatures in order to confirm his research and in order to be accepted in the English Adventurers Club, in London. He is, however, constantly turned down by the club's leader, Lord Piggot-Dunceby, because of his constant failures to capture a specimen, but more importantly, for believing in mythical creatures to begin with. On his many exploits Frost would be accompanied by a personal valet/sidecick, who would often leave him for Frost having put them in dangerous situations. Some such attendents would die during his expiditions. His latest assistent, Lemuel Lint personally quit his employment after nearly having been eaten by The Loch Ness Monster.

As the film starts, Sir Lionel Frost, after failing to photograph The Loch Ness Monster, receives a letter from an anonymous writer who claims to have proven the existence of Big Foot/Sasquatch in the forests of the Pacific Northwest states of America, and has invited Frost to visit him there. With his enthusiasm rekindled, Sir Frost goes to the Adventure's Club to try and present his evidence. But Lord Piggot-Dunceby once again dismiss his claims as nothing more then flytes of fancys. Worse still, he objects to Frost's claims that the existence of a Sasquatch would prove the evolutionary theory of man's evolution, proclaiming that "the English are descended from great MEN, not great APES!" Not wonting to give up on his dream, Sir Frost proposes a wager to Lord Piggot-Dunceby: if Frost brings back accurate evidence to prove the Big Foot's existence then Lord Piggot-Dunceby will have to except his invitation into the club. But should Frost come back empty handed then Frost will never try to join them again. And with that Lord Piggot-Dunceby accepts the deal and Frost heads up to America in search of the creature. 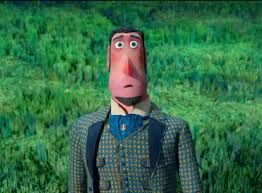