To get peace with Monsoon & Bears (GTLW, failed)

Animals
Sirius is one of the protagonists of Ginga Densetsu Weed: Orion and Ginga: The Last Wars. He is the oldest son of Weed and Koyuki.

Sirius is a silver brindle (tora-ge) Akita Inu/Kishu Inu mix with blue eyes. His fur is portrayed bluish in color. He looks just like his father in every way.

Sirius is calm and kind, brave, strong, and smart like his father. He usually looks out for his siblings. He is a caring, peaceful, and fair, like his father and grandfather, and looks just like them in appearance. Like his father, he opposes violence and killing, and believes in goodness. He is the wisest of is siblings, trying to solve the conflicts between them.

But he can also be stubborn and naive because he still believes he can reason with Monsoon despite the term the bear gave him. This is likely because he saw a light in Monsoon at one time, and because of his young age.

After Hybrid Bear's death, Sirius and his siblings are born in the Futago cell in the early fall, at the end of the series. Daisuke Fujiwara named the puppy.

Sirius and his siblings have become famous, as they are superintendent puppies. They learned from Kisaragi's ability to catch crabs.

Sirius lives with his family in Ōuu until the volcanic eruption surprises them. In the latter months, no other dogs are seen and Sasuke alone takes care of Rigel, Sirius and Bella.

Sirius lives with his family in Ōu, until the volcanic eruption surprises them.

In the latter months, other dogs will not be seen and Sasuke alone will take care of Sirius, Bella and Rigel. When Sasuke does not belong to a long time, Sirius leaves alone to find it and get lost in snowstorm. He is freezing when the boys of Kamakiri appear, who take him along.

Sirius travels with Kamakiri's sons to their territory. Initially, he is considered to be a hostage worker in order to get the information out of him. However, the Sirius is slowly under treatment when the Kamakiri boys realize his combat ability and intelligence. The violent Akakamakiri can easily beat her. Sirius does not accept the actions of the brothers but feels a certain loyalty and gratitude to the brothers because they saved him earlier. Sirius also believes that even the Akakamakiri can turn to good, and is ready to do everything to make it happen.

Later, Sirius travels with the rest of the flock to Ehim and faces a battle against Yamabiko. Then he comes back to Sasuke, sent by Izō to two spies. Sasuke is trying to get Sirius to go with him, but in vain. Sirius runs away and attacks even his brother Orion.

Nevertheless, Sirius tells Tsukikage when the Kamakiri boys are going to attack. He is almost ready to turn to Ōu side, but then ends up defending the Akakamakiri from the Ōu troops and remains in Akakamakiri's nest. Later, when Kamajirō dies, Kurokamakiri and Sirius join Orion's troops, when Akakamakiri leaves for their own way.

Orion's troops return to Ōu and join there with Gini troops. Sirius quickly visits Orion with his parents who are in the care of a man. Weed is joining the rest of us with the improvement of his foot.

When the Ōu army is preparing to fight against the Masamune army, Weed sets Sirius to the forefront. Sirius participates in the battle against the forces of Matheus. After the end of the battle, Masamune ends up suicide. Sirius covers Masamune's body with a scarf. He shows sympathy to the sore of Yamabiko, for even though Masamune was evil, he was still the Yamabo's brother.

After that, Sirius and the other kittens will follow the reptiles and find Kojūrō's body. The kittens bury it together.

Finally, the spring comes to Ōuuu, the first one Sirius has experienced.

Sirius is at the beginning of the story at Akame Mountain with a one-year training session together with Orion, Rigel, Andy and Bon. Yamabiko arrives from Shikoku, where adult friends meet for the first time in half a year.

Later, Akame is running to announce that Monsoon's under attack have invaded Ōu. Sirius leaves with the forces immediately.

Sirius, Shigeki, and a third dog leave reporting for the incidents that have happened to the Unsail. In Nagano, they are facing a great army. Unsa says he is waiting for the Orion and Yamabik troops. Sirius seems agonized and asks whether the whole crowd is leaving for Ōuu. He admits that he is worried about the spiral of revenge and the increasing number of sacrifices, including for the bear. Unsai does not understand Sirius's opinion and asks him sharply whether he would be willing to give mercy to the bear even if he killed his father and mother. Sirius does not answer.

The troops of Orion and Yamabiko are united and finally arrive in Nagano. The United Dog Army then goes to Ōua.

When the forces stop at Kunim, Unsa sets four intelligence units on all the main air routes in the Futago slope. Sirius heads east to another group, including Rigel and Kawasaki.

At night, Tsuyoshi runs by chance to the group and says he is looking for Akame. Tsuyoshi first thinks of Sirius as Weed, but Kawasemi corrects the misunderstanding. Tsuyoshi then asks Akame where other dogs explain the situation to him. 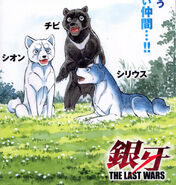 Retrieved from "https://hero.fandom.com/wiki/Sirius?oldid=1784391"
Community content is available under CC-BY-SA unless otherwise noted.