Sister Irene is a major character in The Conjuring horror film franchise, appearing as the main protagonist of the 2018 film The Nun. She is a nun who is brought to the St. Carta monastery to help combat the blasphemous demon Valak.

She was portrayed by Taissa Farmiga.

As a child, Sister Irene had many visions, which would always end with the thought of "Mary points the way". Her father believed her to be mentally ill or a liar and presumably got angry at her until the Vatican learned of her visions, and Cardinal Conroy sent Bishop Forne to help her and ease her visions. The church took her in, and Irene was raised as a nun in the novitiate. Irene believed that her visions were a gift from God, and planned to someday take her vows, become a professed nun, and devote her life to Christ.

Years later in 1952, a horrible incident occurs at the St. Carta Monastery in Romania: a nun apparently commits suicide and is found hanging from a noose by the nearby town's grocer Frenchie. When the Vatican learns of it, they send Father Burke to investigate but decide to have him take Sister Irene with him, as her visions seem to pertain to the incident. Father Burke meets with Sister Irene, who accepts the task.

The two travel to Romania and to the monastery, but the Abbess informs them that only Sister Irene is allowed to enter since it is cloistered. She offers them lodging that night, where Burke explains to Irene about an exorcism he failed and feels guilty of. That night, Burke is attacked by a demonic spirit and buried alive, though Irene manages to hear the commotion and dig him out.

The next day, Irene enters the abbey and finds the nuns praying in shifts all day and night in order to keep the evil of the land at bay. The nun Sister Oana explains that, before it was a monastery, the castle was a place built and owned by a Satanic worshiper who summoned a demon. Christian knights were able to seal it away with the true Blood of Christ, but bombings during World War II reopened the rift.

It is then revealed that the demon, named Valak, is loose, and attacks Irene. Irene prays with the other nuns, ignoring the demon carving a pentagram into her back just to try and keep praying and ward it off. However, Irene realizes that all of the nuns, including the Abbess and Sister Oana, have been dead the whole time, killed by Valak, and that they were just visions. She, Burke, and Frenchie realize that the nun that killed herself did so to prevent Valak from possessing a human host. They figure out that the only thing that can stop Valak is the Blood of Christ, which is in a vial hidden in the reliquary. Before they leave, Sister Irene takes her vows, and Burke elevates her to a professed nun.

Sister Irene, Father Burke, and Frenchie go down to the reliquary, fending off Valak's attempts to kill them until they come across a statue of the Virgin Mary, and Sister Irene remembers "Mary points the way". They follow where the statue's hand is pointing to a keyhole, which they unlock to find the vial of the Blood of Christ. However, Valak separates them and lures Sister Irene into a pentagram, where it gains the power to take over her body.

Valak, possessing Sister Irene, attacks Frenchie, but he smears some of the Blood of Christ on her face, releasing Valak's hold over her. Valak then attempts to drown Irene in a flooding chamber, but Irene manages to get the vial of Blood and pour it in her mouth, spitting it on the demon's face, banishing Valak and sealing the rift. After being saved from drowning by Frenchie, she asks him his name, to which he reveals is Maurice. The next day, the trio bury all the deceased nuns, and after Maurice questions the remaining holiness of the abbey, Sister Irene confirms Valak's defeat restored it. However, unknown to Sister Irene and Father Burke, they had actually failed to seal Valak into the rift, as the demon had actually managed to attach itself to Maurice via an inverted cross scar at the back of his neck. This allowed Valak to finally escape into the world.

Years later, Maurice would finally be exposed as Valak's vessel by Ed and Lorraine Warren, who then called in priests to xcersice Valak from Maurice, tragically causing Maurice to perish sometime later. Valak would spend nearly a decade trying to get revenge on the Warren's for outing it, only to be finally defeated and sent back to hell once it targeted another family.

Sister Irene is a determined and devout follower of God, and never lets anything dwindle her faith. She is kind and outgoing to everyone she meets, treating everyone with respect and dignity even if they do not do the same for her. She does not hesitate to save others in danger or comfort them when they are in need, even if her own life is in jeopardy. She is forgiving of transgressions, and serious and dutiful when battling evil. 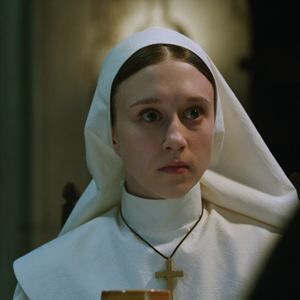 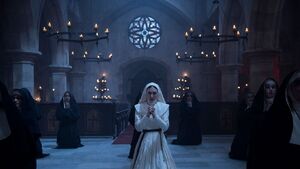 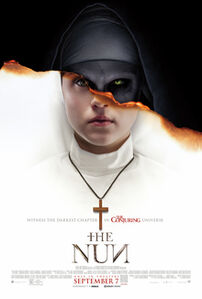 Retrieved from "https://hero.fandom.com/wiki/Sister_Irene?oldid=1924708"
Community content is available under CC-BY-SA unless otherwise noted.