Shalice Tilman, more commonly known as Sister Psyche', is a heroine in the online video-game City of Heroes. Sister Psyche' is a mutant born with psychic powers which she uses to protect her home of Paragon City. Sister Psyche' is a member of the Freedom Phalanx and it's second oldest member behind it's leader Statesman. Despite her appearance of a woman in her late 20s to early 30's Sister Psyche was in-fact in her mid 80s at the game's launch.

The Birth of a Nemesis

During World War II many meta-humans plied their power in service of their country or in attempts to reduce civilian casualties on either side and were active in Europe. During the closing days of the war a new breed of villain struck seeing his chance to seize control of the US with no one around to stop him, thus did the arch-villain Nemesis announce his existence to the world when holding the Capital building and all those inside hostage until he was declared emperor of the The Untied States. Hearing of the madman, Statesman lead a team of what few meta-humans could be spared from the fighting and make it back to the US the fastest to save the US senate. Among Statesman's regiment was Sister Psyche' a recently awakened psychic. Even once they arrived Nemesis seemed not to be afraid as he had already set bombs in every major metropolis in the country and activated them upon seeing the super-human cavalry arrive. Nemesis explained the bombs were releasing a type of nerve gas he has specially created and that like the bombs he had hidden antidotes near each city, antidotes he would reveal only after becoming Emperor and that if he was harmed they would never find the antidotes in time. Nemesis's leverage was enough to keep the troop of superheroes at bay while the Congressmen began to seriously re-consider Nemesis' request. However while the other superheroes were kept at bay and Nemesis waited for the newly motivated Congressmen, Sister Psyche' used her powers to read Nemesis' mind. She then telepathically conveyed the locations to the police who began immediate communications to the affected areas about where to find the anti-toxins. Sister Psyche' revealed what she had done once the anti-toxins were being released and that Nemesis's main leverage was gone at which point the til then halted heroes charged the Capital building to arrest Nemesis. There were many casualties in the fight but eventually Nemesis was defeated. When caught however it was revealed that during the scuffle Nemesis had gotten away and Nemesis seen in the building once the fighting started was in fact a automation modeled in the image of Nemesis's power suit, which had done the fighting while the real Nemesis had escaped. However with the Congressman saved and the country recovering from the attack, accolades were showered upon the young girl who made it possible, Sister Psyche'.

During the 1970s Sister psyche' was mortally injured in the line of duty. She was taken to the hospital but though the doctors explained they could heal most of the damage they could not stop her from going brain-dead within hours from the damage. Psyche' had a technique she was perfecting called Mind Riding that would actually allow her to leave her body by possessing someone else however since she had not had a chance to perfect it she could not use it for any extended period on normal humans. Fortunately a young girl called Aurora came forward saying she had come to the hospital to see Sister Psyche' whom she considered her idol because she too was born a psychic. Aurora volunteered to let Sister Psyche' possess her while her body healed. Most of the damage to Shalice's body was able to be repaired except for the brain damage, it would be a few decades before medical technology would advance to a point where it could be repaired. Much to everyone's surprise Shalice's body appeared not to age as an odd side effect of her Mind Riding technique. Psyche' spent her time as Aurora fighting lesser crimes so as not to risk Aurora's health, Psyche' also made certain to keep Aurora conscious of what was going on and routinely shifted control back to her so as not to over complicate her social life any more than was necessary from the odd arrangement.

By the 90s surgical techniques had advanced to the point where Shalice's brain could be repaired and upon success of the operation Shalice finally returned to her own body. As thanks to Aurora, Sister Psyche' took her under her wing as her sidekick and taught Aurora all she could about controlling and expanding her powers and soon Aurora took up the mantle Aurora Borealis. There was a side-effect to the years spent in Aurora's brain however, Aurora's mind had imprinted itself on Shalice this left Shalice with a psychic double of Aurora in her head which occasionally seized control of her mind and left Shalice arguing with herself about virtually every decision she made. To prevent herself from going mad Shalice used her powers to create a psychic wall sealing the imprint of Aurora away in an inert corner of her subconscious granting her peace of mind once again. In the coming years Shalice and Aurora became inseparable, each was the maid of honor at the other's wedding and when fighting together Sister Psyche' and Aurora-Borealis were considered the world's most powerful psychic force. Though Sister Psyche's tried to keep Aurora Borealis out of more dangerous missions Aurora often insisted upon coming anyway saying they were more powerful as a combined mental-force than separate psychics.

Sister Psyche' has a wide arsenal of psychic powers each finely honed. Sister Psyche' can read minds for miles, this is somewhat uncontrollable however and she often is left hearing the surface thoughts of those in her immediate surroundings despite her best efforts to shut them out, when intentionally employed though she can sift through the thoughts of the entire city populace without leaving her room. Psyche' can employ potent telekinesis that outdoes most forms of super strength, allowing her to causally toss tanks around with her mind. Sister Psyche' can use advanced hypnosis and mesmerism to psychically induce sleep in her opponents or leave them mentally stunned. Sister Psyche' is well versed in mind-control and can temporally make her commands top priority for her former opponents converting them to temporary allies. She can create telekinetically induced force-fields around her and her allies, preventing immediate harm to them and deflecting projectiles. Sister Psyche's most advanced power is her Mind Riding technique since it allows her to actually possess a target, though when she was first inventing the technique it could only work on other psychics she has since perfected it to affect non-psychics as well, although it seems somewhat easily dispelled by magical origin heroes. Psyche' can use her powers to repair damaged minds as well, as she uses her powers to routinely tone-up her secondary sidekick, Malaise, an illusionist psychic who suffers from split-personality-disorder and depends on the mental maintenance to keep from slipping into insanity.

Sister Psyche' feels highly responsible for protecting her community and even spends her free time helping neighborhood children repair their bicycles and get Frisbees down from roofs. Despite her altruistic nature Sister Psyche' is very snide and easily annoyed. Many stories are told of people who causally thought she was a snob only to find themselves talking backwards for a week while Psyche' was left grinning. Shalice is very protective of Aurora and the only time the two argue is when Shalice is trying to keep her loyal sidekick from going on a mission Shalice feels would put her at serious risk. Shalice eventually married her team-mate Justin Sinclair AKA Manticore. Though the two were very much in love they frequently bickered even on the job. Though Justin was wealthy and had his own manor, by all accounts Shalice stayed at her own place and continued living by her own means. 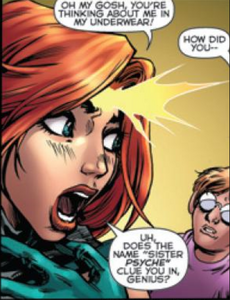 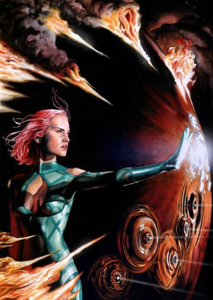 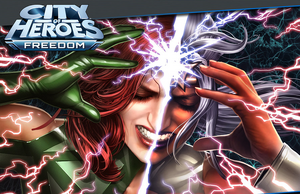 Sister Psyche' trying to seperate her mind from Aurora's.
Add a photo to this gallery

Retrieved from "https://hero.fandom.com/wiki/Sister_Psyche%27?oldid=2072081"
Community content is available under CC-BY-SA unless otherwise noted.