The Girl in the Yellow Raincoat
Mono

She is voiced by Anna Moberg and Hilda Liden.

Trapped in the darkest depths of The Maw, starving and alone, Six’s world is one filled with danger. Most children would have already given up, but Six is different. She’s smart, and tough, and has a lovely yellow raincoat. She belongs elsewhere.

Awakening in a world she cannot recognize, Six must learn to trust someone else if she is to stand a chance of survival. She has already seen more than any normal child ever should, but then... Six is not a normal child.

A young pale-skinned girl with black hair and bare feet. She wears a yellow raincoat with a hood over her head that covers her face in shadow. However, In Very Little Nightmares, she is seen wearing a white dress instead. In Little Nightmares II, Six wore a pale jumper for the Wilderness and School portions of the game.

The game begins on a vessel called The Maw, an offshore resort were various misshapen people go to feast and relax. Many children onboard The Maw are captives who are seemingly used as a source of meat to be prepared and served to gluttonous guests. Six is one of the lucky few to have alluded The Maws staff by living within the vessels vents, but like the other kids, she desires to leave The Maw entirely.

After having a nightmare about The Lady, proprietress of The Maw, Six begins her journey outside by venturing through The Prison, where all escapees are kept. She avoids giant leeches and searchlights that can literally petrify children with its gaze before she starts experiencing sharp hunger pains that stops her from going any further. A boy in a nearby room decides to throw Six a piece of bread which she ravenously eats, unaware that she is being watched by a shadowy copy of herself.

Upon finishing her food, Six makes her way to The Lair where a blind janitor performs his various tasks. She tries to avoid him by using sound as a distraction, but is eventually captured when The Janitor lures her into a cage with a piece of meat. Six manages to escape her imprisonment and has a few more encounters with The Janitor before she is cornered by him inside a confined room. A jammed steel door separates Six from The Janitor, forcing the latter to stick his long arms beneath the door and feel around for Six on the other side. Six works around his flailing arms to dismantle a object causing the door jam, allowing the door to close onto The Janitor's arms and sever them from his torso.

Six next heads over to The Kitchen where she again suffers from hunger pains, and is forced to eat the flesh of a live rat to continue further. She sneaks past the Twin Chefs as they work to prepare food and wash dishes. She outwits the chefs by climbing up high where they cannot reach her, using sound to lure them away and grabbing onto a conveyor belt of hooks to be lifted out of danger.

After climbing around the exterior of The Maw, Six finds herself among the vessels greedy guests in the middle of a buffet. She narrowly avoids being eaten by various people before having another encounter with one of the Twin Chefs who chases her into a nearby restroom. Six again evades the chef but soon ends up fleeing from a stampede of guests emerging from their rooms and barely manages to outrun them before her strong hunger pains return. As she looks for something to eat, a friendly Nome (who is actually the Runaway Kid) offers Six a sausage to munch on. However Six grabs the Nome and eats him instead, causing other Nomes in the area to run away in fear. Reinvigorated again, but at the cost of a Nomes life, Six rides an elevator in the next room up to The Lady's quarters.

Six sneaks her way past The Lady to obtain a key and open a locked door. However, The Lady starts pursuing Six as she makes her way though a room full of mannequins before ending up in a large, mostly empty area. Six finds a shiny mirror to use against The Lady as she attempts to approach her in darkness. The mirror's bright reflection proves too much for The Lady to stand as she eventually screeches in agony before falling to the floor in defeat. At that moment, Six's hunger pains return, and she decides to take a bite out of The Lady's neck to satisfy it, gaining her powers as a result. Six then returns to the floor below to finally exit The Maw while using her new powers to kill all guests present (by presumably draining their life force). Although Six succeeded in escaping The Maw, she arguably became as bad as the people on board to do so.

Set before the events of Little Nightmares and Little Nightmares II, Six is trying to escape a place called The Nest owned by a self-centered mistress called The Pretender. She briefly meets with the games protagonist (known as The Girl in the Yellow Raincoat) before continuing her own journey through the mansions rafters. Eventually both Six and the main protagonist manage to make it outdoors and work together to flee from the mistresses butler pursuing them. Six falls over during the chase and is locked out of a nearby shed. So she takes an alternate route which suddenly collapses beneath her feet.

Luckily, she is saved from falling by the protagonist, who is soon cornered by The Pretender at the edge of a cliff. Six's attempts to save her colleague by crushing their mutual foe under a boulder, but The Pretender still had enough energy to attack the protagonist and send them both falling into the sea below, where they presumably drowned. Afterwards, in a post-credits scene, Six climbs down the cliff towards a piece of flotsam that could be used as a raft.

Six is first encountered by the protagonist Mono within The Hunter's residence, boarded up inside a dark room without her bright yellow raincoat. She was sitting by herself, listening to a music box when Mono's sudden arrival frightened her into hiding beneath a nearby bed. Although Mono tried to show her that he meant no harm, Six continued to avoid him until she found herself unable to enter the attic on her own. She decided to cooperate with Mono so they can escape the house together but they accidentally alerted their presence to The Hunter while doing so, causing him to pursue them with his shotgun.

Six and Mono run for their lives as they use the environment to avoid The Hunter's gunshots and hide from his gaze. They eventually lock themselves inside a small shed containing a spare shotgun and just managed to lift the weapon off the ground before firing a round into The Hunter once he broke through the door. Afterwards, Six and Mono climbed out of a nearby window and use some flotsam to sail across a large stretch of water towards the Pale City.

A little later, the pair wound up in a hazardous school where Six is kidnapped by it's deranged students. Mono eventually found her hanging upside-down by a rope in the restroom and managed to get her down after dealing with her tormentors. Safe but not satisfied, Six took her revenge on the next bully she came across by pinning them down and shattering their porcelain head against the floor. Six and Mono then evaded the school's sadistic teacher in the music room to finally escape from the building through a winding vent.

The duo continued their journey through The Pale City's gloomy streets while it poured down rain. They briefly find some shelter when Six spotted a bright yellow raincoat similar to her previous one and wore it to keep herself dry as she accompanied Mono into a dark hospital. Six assisted Mono by helping him carry energy cells to activate an elevator and managed to open an escape when they were under attack by living served hands. On the lower levels of hospital, the pair were also able to trap a large twisted doctor inside an incinerator before finding a way to exit the building.

Six and Mono head further into the city's residential areas where they see a number of city folk completely mesmerised by their televisions. This made it easier for the kids to sneak through various apartments so they can traverse between buildings across the rooftops. Unfortunately, one building they entered suddenly collapsed and Six is partially buried underneath the rubble. Although Mono was able to pull her free, they soon faced more danger when the mysterious thin man emerged from an apartment's television set. Six quickly ran into the next room to hide under a table, but The Thin Man was not fooled and took her away, only leaving behind her Glitching Remains (a digital apparition of the person abducted by The Thin Man).

After Mono escapes from a horde of Viewers (the townsfolk) by travelling through a television, he arrives in another apartment. He explores a bit before finding Six trapped inside an active television, banging on the glass, trying to get his attention. Mono comes to her aid and tries to pull her out. He nearly succeeds but Six is grabbed by the Thin Man and pulled back into the TV before the latter comes out and chases Mono. Six meanwhile was sent to the Black Tower where she was transformed into a monstrous version of herself.

Mono later found her listening to the tune of a large music box and deduced that by breaking it, Six could revert to her normal state. However Six flew into a rage when Mono damaged the toy and pursued him throughout the Black Tower until the music box was eventually destroyed. Six return to normal and regained her senses as the organic walls of the tower attempted to stop them from leaving. Six was first to reach the exit while Mono was forced to jump across a collapsed bridge separating them. Although She managed to grab him by the hand, rather that pulling him up, Six instead let him fall into the abyss below and escaped alone, putting a tragic end to their partnership.

If the player had found all hidden Glitching Remains in the game, an additional scene is shown during the end cutscene. After leaving the Black Tower, Six emerged from a television and was met by her own Glitching Remains, which now resembled the shadowy copy of herself from the first game. Shadow Six looks towards a flyer for The Maw before disappearing, while Six's stomach begins to grumble from hunger.

During her quest to escape The Maw, Six encounters a group of children who wanted to know how she wound up on the vessel in the first place. A flashback is shown of Six working her way through the crowds of a bustling city until she is discovered by The Ferryman and presumably taken to The Maw. Believing she does not recall how she arrived, the group relay to Six stories of their past to help her remember. After the first tale, Six finds a music box to share with the group. However their joy was quickly interrupted by the hunchback child, who destroys the box as it was apparently attracting Leeches. 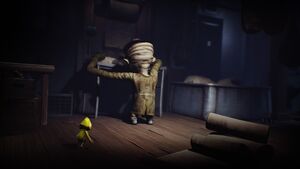 Six, hiding from The Janitor. 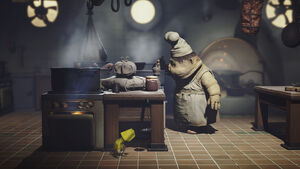 Six, avoiding one of the chefs. 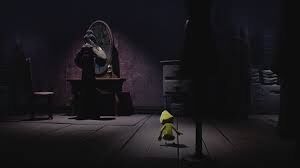 Six, sneaking past The Lady. 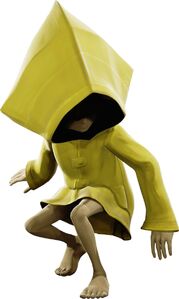 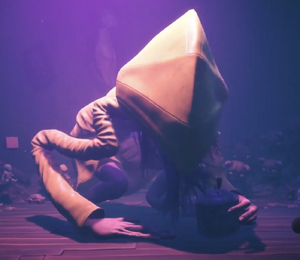 Six in her monster form.
Add a photo to this gallery

Retrieved from "https://hero.fandom.com/wiki/Six_(Little_Nightmares)?oldid=2224270"
Community content is available under CC-BY-SA unless otherwise noted.