Heroes Wiki
Register
Don't have an account?
Sign In
Advertisement
in: Male, League of Legends Heroes, Status Dependent upon Player Choice,
and 17 more

Save the brackern race (ongoing)

Other brackern
Seraphine (one-sided on her part)

Skarner, also known as The Crystal Vanguard, is an anti-heroic playable champion in the massive multiplayer online game League of Legends.

He is one of the brackern, a peaceful species of giant crystalline scorpions who were hunted by humans for their elusive crystals, which were often used in Piltover's hextech. Awakened by the telepathic screams of his brethren, Skarner rose from dormancy and took it upon himself to save his kind from extinction.

The 81st champion added to the game, Skarner was released on October 9th, 2011. He is commonly played in the jungle.

He is voiced by David Lodge, who also voices Ivern and pre-rework Galio in the same game, Tenderheart Bear from Care Bears: Welcome to Carealot, Jiraiya from Naruto and Jeralt from Fire Emblem: Three Houses.

Skarner was one of many brackern living in the desert before it came to be known as Shurima. They communicated through a dreamy song emitted by their crystals, and when they died their young would inherit their crystals to continue the cycle once more. Skarner heard his crystal call to him deep within the earth, and he merged with it allowing him to listen to his kind's dreamsong. When mortals gained dominion of the land, the brackern held contempt towards them and assumed they would destroy each other, so they continued to sleep.

Skarner's peaceful lifestyle was interrupted when the song turned into a scream, as human miners began to extract the brackern's soul crystals. While the other brackern suffered, Skarner rose from the ground and flew into a rampage, killing many of the miners. However, he could not save his fellow brackern as they died due to the trauma of their grievous injuries.

Skarner rose from the grounds, eager to hear the song of a crystal once more, but every time they would fade as they took their last breaths. He now wanders Runeterra to search for remnants of his kind, as the survival of the brackern race are all that matters to him.

Skarner used to be like any brackern: peaceful and dormant as he linked with the collective consciousness of his kind. Like the other brackern, he thought lowly of humans due to their violence, but it developed into misanthropic hatred after he heard the suffering of his kind from being extracted by human miners. Skarner learned to speak their language of violence by killing them and later impaling one of the miners to spread a warning that the brackern's crystals are not theirs. While his peaceful nature disappeared, he holds a forlorn longing to hear his kind's song once more. 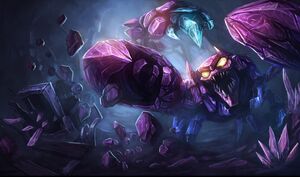