Repairing things or working with his best friend Mickey at the Sunny Vista Nottingham Hotel.

Spending quality time with Marty's grand kids and with Jill.

Prevent the school from being demolished where the new hotel Kendall was building and win Jill's heart (succeeded).

Skeeter Bronson is a hotel handyman who was promised by his father, Marty, to be the manager of the family hotel. A mysophobe named Barry Nottingham agreed to keep that promise when the Bronson family sold their hotel to him—then built a new hotel instead. Thirty years later, when the story begins, Skeeter is the hotel's handyman while management is held by Kendall. Barry's new hotel, the Sunny Vista Nottingham Hotel, is a hit, but he's got plans to build an even more elaborate hotel, one designed around a theme that he's keeping secret.

Skeeter's sister and principal of Webster Elementary School, Wendy asks Skeeter to watch her kids, Bobbi and Patrick, while she goes out of town. Skeeter does not know his niece and nephew very well, but agrees to watch them. Helping him out during the day is Wendy's friend, Jill Hastings, an elementary teacher who works at the same school as Wendy. That night, putting Bobbi and Patrick to bed, Skeeter gives them a story, one obviously inspired by his own life as an "underappreciated" handyman: a downtrodden squire "Sir Fixalot" rivals the pompous "Sir Buttikiss" in competition for a new job. The kids add their own details such as the king giving Sir Fixalot a chance to prove himself, a mermaid based on Jill, and a downpour of gumballs when Fixalot prevails.

The following day, while fixing Barry's television, Skeeter learns that the new hotel's surprise theme will be rock and roll. Barry is shocked to learn from Skeeter that the idea was already used for the Hard Rock Hotel. Barry offers Skeeter a chance to compete with Kendall for a better theme. While driving, Skeeter is suddenly greeted with a shower of gumballs which he does not see is caused by a crashed candy delivery truck. Skeeter concludes that the story had come true and quickly develops a plan.

For the next story, he chooses a Western in which he receives a horse named "Ferrari" from a Native American horse trader for free. The children change the story to have him save a damsel in distress. They claim he should be rewarded with a kiss, only to have a dwarf kick him instead. That night, Skeeter goes out in search of his Ferrari and meets a man who steals his wallet (that only had three dollars and a baseball card). Barry's daughter, Violet Nottingham, hounded by the paparazzi, is rescued by the passing Skeeter. Just as he is about to kiss her, he is kicked by a dwarf. The dwarf then flees to a nearby AMC Gremlin, hops in, and flees. From this point, he determines that it is only the changes made by the children that affect his reality.

The following night, Skeeter tries to sell the kids on the theme ideas contest for the new hotel, but they are more interested in romance and action in their stories. The next story is centered around a Greek gladiator, Skeeticus, who, after impressing the emperor and a stadium of onlookers, attracts the attention of the most beautiful maiden. After a meal in which all the girls who used to pick on him in high school were so impressed by the beautiful maiden he is with, they start randomly singing the "Hokey Pokey." After Skeeticus saves a man's life, a rainstorm sends him and the maiden into a magical cave which has Abraham Lincoln in it. Skeeter loses his patience with the story and upsets the children, telling them that their stories have nothing to do with real life. Unable to get them to continue, the story ends.

The next day, Skeeter learns Violet will not be meeting with him per the story design, but unexpectedly runs into Jill at the beach who invites him to lunch. Recognizing girls at the restaurant from his high school days, Skeeter asks Jill to pretend to be his girlfriend. The girls are plainly impressed and then inexplicably break into the "Hokey Pokey." Walking on the beach with Jill, Skeeter casually saves the life of a man before a sudden rainstorm sends them under the dock. Skeeter realizes that the girl in the stories is Jill, not Violet, and that he is falling in love with her. As they are about to kiss, Skeeter remembers that Abe Lincoln is supposed to appear and moves away. Instead, an American penny (with Lincoln's face on it) falls from through the cracks of the dock, completing the story.

Panicking, Skeeter sees/hears signs of fire everywhere. At Barry's luau-themed birthday party, while dodging many fiery hazards, Skeeter's tongue is stung by a bee, making him as hard to understand as his character was in the last of the stories. Luckily, Skeeter's best friend, Mickey, can still understand him and offers to translate for him. Kendall's idea is for a hotel with a theme celebrating Broadway musicals—an idea that impresses no one. Barry much prefers Skeeter's approach - simply reminding them of how much fun children have when staying at a classy hotel. After winning the competition, Skeeter thinks he's found his happy ending. Instead, Kendall reveals to Skeeter that the new hotel is replacing Jill, Patrick and Bobbi's school, which is to be demolished the next day. Stunned at that, Skeeter then panics when he sees Barry's oversized birthday cake. Skeeter douses the candle and Barry with a fire extinguisher. Barry immediately tells Skeeter that he's fired.

Afterwards, Jill, Patrick, and Bobbi discover that the school where they all work and attend is to be knocked down to make way for the new hotel, and they are all upset with Skeeter, refusing to believe that he didn't know about the location. Wendy believes him, but is upset because he taught her children not to believe in happy endings. She confesses that she had always been jealous of his and their father's ability to believe in made up stories and have fun the way she never did and had secretly hoped that, by leaving her children with him, his fun loving nature would rub off on them. When they attend the demolition to protest, Skeeter is inspired to prevent the school from being demolished - Donna Hynde, one of the girls from his high school days, is a zoning commissioner, and helps find Barry Nottingham an alternative location on the beach in Santa Monica. Skeeter takes Jill on a wild motorcycle ride (during which Skeeter steals back his wallet from the thief who stole it) which ends at the school and manages to stop the countdown of the demolition. As a reward, Skeeter asks Jill for a kiss and she gladly complies.

Sometime later, Skeeter finds Marty's Motel (named after his late father) while Kendall and his scheming partner, Aspen, are demoted to Skeeter's motel wait staff. In the film's conclusion, Marty Bronson narrates that Barry Nottingham overcame his fear of germs to the degree that he left the hotel business to became a school nurse at Webster Elementary School. His daughter, Violet Nottingham, became the new owner of her father's hotel business and married Mickey, while Skeeter and Jill got married as well and live happily ever after. 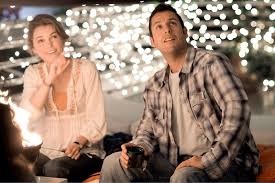