No information
Mosquito "Skeeter" Valentine is Doug Funnie's best friend in the series Doug. In the film "Doug's 1st Movie", he is the deuteragonist. In the Nickelodeon series, his skin is a dark blue, which is turned lighter in the Disney series. He is famous in both series for frequently making honking sounds. In both series, he is voiced by Fred Newman.

He is famous in both series for the honking sounds he frequently makes. Skeeter's family has lived in Bluffington for some time. Skeeter initially helps Doug order food from the popular Bluffington restaurant Honker Burger (sold and converted into a French restaurant in the second series) in the series premiere (resulting in their friendship), and later helps Doug learn how to dance. He had dated Bebe Bluff, Muffy Silverson, and Loretta. Skeeter also seems to be more down to earth and has more common sense than Doug or any of the other characters and is usually the voice of reason. He has a superhero alter-ego, whom he calls The Silver Skeeter. 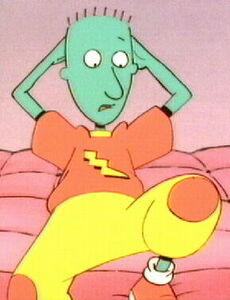 Skeeter in the Nick series