Heroes Wiki
Register
Don't have an account?
Sign In
Advertisement
in: Street Fighter Heroes, The King of Fighters Heroes, Superheroes,
and 45 more

Fighting crimes for freedom and justice.

His wife and children

Superhero
Skullomania is a hero from the Street Fighter EX series, developed by Arika.

Skullomania is the secret identity of Saburo Nishikoyama, a third-rate businessman from Tokyo who works to support his wife and children. He adopts his superhero identity when a client asks him to dress up and pose for a superhero attraction at his department store. Donning a full-body skeleton suit, Skullomania sets out to fight evil for real.

In Street Fighter EX2, his costume is redesigned, adding a red scarf and a red letter "S" in front of his mask. Many elements of Skullomania are homages to the tokusatsu genre of Japanese action shows in general and Kamen Rider in particular, specifically the red scarf, belt, and prominence of flying kicks in his fighting style. He makes later appearances in the PlayStation 2 music game Technictix and in Fighter Maker.

The character is also used in Komodo Crunchtime, a 2012 shooting game from Rie Studios. 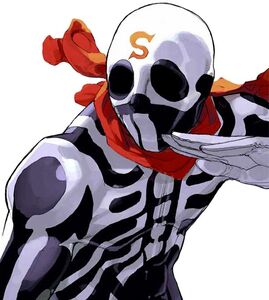 A mugshot from Street Fighter EX3. 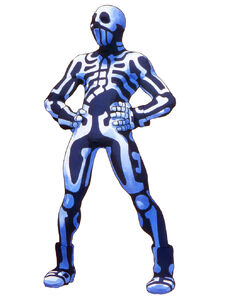 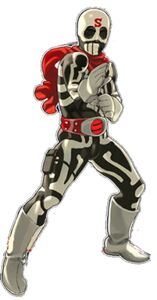 Skullomania as he appears in Street Fighter EX2. 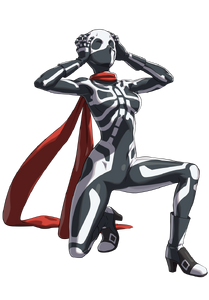