Air rescuer of the PAW Patrol

Playing with her friends

Skye is one of the two tritagonists of the Canadian cartoon series PAW Patrol. She is a Cocker Spaniel/Poodle mix who is the aviation pup of the titular team.

She is voiced by Kallan Holley in the Canadian and North American versions of TV series and by Holly Thomas in the British version.

Skye is an adorable pup with magenta colored eyes. She has a special pilot outfit in the color pink. Skye is the smallest of the pups, and she is the first female member of the PAW Patrol. Her shaggy ears, her tail, the fluff on her head, and the circles around her eyes are a golden-brown/orange color. Her legs, snout, and belly are a cream color. The rest of her body is golden-brown. Her nose is brown and so are her eyebrows. She has three small eyelashes and fluff on her forehead.

Skye is fun-loving and loves to play and participate in fun activities with her fellow PAW Patrol friends such as Pup Pup Boogie. However, she and Zuma can be competitive against each other. She is quite energetic, best emphasized by her giggle-bark and penchant for doing backflips.

Skye is very brave and smart. She's not afraid of heights at all and takes enjoyment out of flying. Skye also has a fear of eagles, as seen in "Pups Save a Toof", but she will face that fear to help others and she doesn't mind harmless baby eagles.

She has a soft spot for cute animals, especially bunnies. She often gushes over them when they're in sight. Like Rubble, she is sweet towards little kittens as long as they're not the Kitten Catastrophe Crew.

She's more feminine in behavior than Everest and loves getting her fur styled at Katie's salon. She loves pink and is rather fond of dressing up femininely, especially on Halloween.

Skye's main ability is to fly using the retractable wings in her pup pack. Her flight goggles also function as binoculars, allowing her to see things from afar. Skye is also very graceful and a good dancer, and can perform backflips with ease (and nearly always does when she jumps).

Skye's vehicle is a pink helicopter that features a harness in the back, as well as a cable that can be used to pick up things that are out of reach. Its vehicle number is 04.

Skye's Mission PAW vehicle is the "sky cycle", a motorbike with the ability to transform into a four-wheeled hovercraft, and her Mission PAW Pup Pack features a suction cup launcher that can be used to grab objects from afar.

As a Mighty Pup, Skye has the ability to fly on a tornado and can control herself in mid-air with her Wind Rider Wings that appear and disappear along with her tornado. 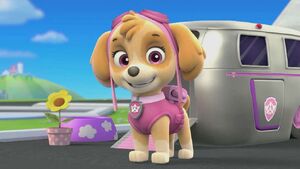 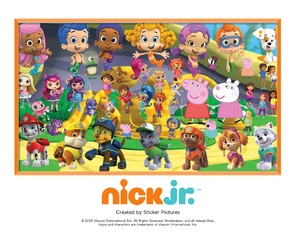 Retrieved from "https://hero.fandom.com/wiki/Skye_(PAW_Patrol)?oldid=2076317"
Community content is available under CC-BY-SA unless otherwise noted.