Skyfire, or Jetfire is a Decepticon-turned-Autobot with a jet or space shuttle alternate mode.

In the many stories of Skyfire told through the numerous Generation 1 continuities, there is one constant aspect — an early alliance with the Decepticons, which has served only to convince him to side with the Autobots. Skyfire's dedication to the Autobot cause is matched only by his devotion to scientific and technological advancement — this, he believes, is the only way in which victory over the Decepticons can be achieved. It is this overriding belief that tempers his bravado in battle, but nevertheless, he is often one of the most eager Autobots to plunge into combat, and his position as one of the fastest usually means he is the first to do so.

In the cartoon, Skyfire was voiced by Greg Berger, who also voiced Grimlock.

On Cybertron before the war, SkyFire was a scientist and explorer working with Starscream. Together, they investigated an uncharted planet (Jacinto), where they failed to find signs of intelligent life. Sky Fire wished to scrutinize the planet further, and moving in close enough to the planet, a polar wind storm swept him up and buried him beneath the Arctic ice. Starscream searched for his friend, but was unable to locate him and returned to Cybertron alone and abandoned his scientist ways and joined the Deceptions, becoming second-in-command to Megatron.

Fire in the Sky

Millions of years later, in 1984, the Decepticons excavated the frozen Skyfire while draining heat energy from the Earth's core and reactivated him. Reunited with his old friend, Starscream, Skyfire joined the Decepticon ranks. When the Autobots arrived, Skyfire engaged in battle with them, but then saved the Autobots' human allies Sparkplug and Spike Witwicky when they became stranded on an ice floe. Naively, he took the two to Megatron under the impression that he and the other Decepticons were good, but when Megatron took them as prisoners, Skyfire started to question his allegiance. When Starscream ordered him to destroy the captured Autobot search party, he refused, and Starscream turned his weapons on him, leaving him heavily damaged. Repaired by Ratchet, he joined the Autobot side and engaged in a dogfight with Starscream which ended when he sacrificed himself to stop the core drain, burying himself in ice once again in the process.

A short time later, however, Skyfire was recovered by Wheeljack and Sideswipe, and immediately participated in an attack on the Decepticons in Peru, where the antagonists were once again attempting to use the Earth's core energy for their own means. Skyfire was almost permitted to destroy the villains' new weapon by Thundercracker, but was then blasted by Starscream and repaired with some difficulty by Spike.

Skyfire would go on to make semi-regular appearances in the immediate future, helping the Autobots evacuate their base when the volcano it was embedded in became active, and flying a squad of troops to battle the Insecticons.

Skyfire being revived by the Decepticons. 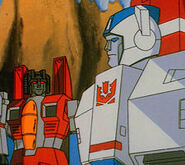 Skyfire leaving the Decepticons and joining the Autobots.

According to prequel comic Secrets and Lies, Jetfire was originally Skyfire, a Decepticon scientist who was a friend of Starscream's and a subordinate of Shockwave. After Cybertron had been sent hurtling out of orbit, Skyfire felt that the planetary turbines of Project Dreadnought could have carried them to other worlds for resources and agreed with Starscream that Megatron's obsession with Optimus Prime was detrimental to the Decepticon Empire.

After the destruction of a half-completed turbine had sent the planet towards the Stellae Cimeterium, Skyfire briefed Megatron on the situation. When the Decepticon leader learnt that the Autobots would be launching a ship to destroy an oncoming asteroid belt, he ordered Skyfire to construct a ship in which they could pursue. Despite creating the Nemesis, Shockwave barred Skyfire from boarding it. When a silent alarm was triggered at the destroyed turbine, Skyfire flew ahead to confront the Dynobots, initially holding the advantage until Grimlock sliced off his wing, and was seemingly killed in the crash. After Shockwave had blown up the Dynobots, he retrieved Skyfire's intact brain module and promised to rebuild his friend.

Events from the UK-only comic stories are in italics.

Skyfire would be re-crated as Jetfire, who's body was created by Shockwave, along with the Constructicons to be used as a new Decepticon. He planned to use Optimus Prime's head, containing the Creation Matrix to give life to Jetfire and the others. Optimus Prime had secretly passed the Matrix onto the teenaged Buster Witwicky, so although the Constructicons were brought to life, Shockwave was unable to bring Jetfire to life. Shockwave soon learned of the human's involvement, so he sent Jetfire's non sentient body after the human. When Jetfire found Buster, he was accompanied by Bluestreak and Bumblebee for his protection, but Buster's Creation Matrix powers disassembled Jetfire. Buster reassembled Jetfire, and with Bumblebee's help, changes were made to allow Buster to directly control him.

Despite his new allegiance, he was briefly mistrusted due to his Decepticon origin, and during Dinobot Hunt Ironhide resented being given orders by someone with a Decepticon insignia; Jetfire proved himself by restraining Slag, and had his badge torn off in the process. Having proven himself, he was granted the Rite of the Autobrand marking him as one of their rank.

In Plight of the Bumblebee, When the depressed Bumblebee, left the Autobots and was attacked by the Decepticons, Jetfire eagerly came to his rescue. He arrived to the battlefront ahead of the rest of the Autobots and attempted to take on Shockwave and his troops on his own, but was no match for the Decepticon commander. The enemy was driven off when the rest of Optimus's troops caught up to him.

In Command Performances, Jetfire assisted Optimus Prime's plan to observe the Constructicons in order to develop combiner technology, acting as a decoy to keep the human military out of the way. In Target: 2006, when Optimus Prime, Prowl and Ratchet were shunted into limbo by the arrival of Galvatron, Cyclonus and Scourge from the future and Jazz was captured while on a scouting mission, Jetfire took over as Autobot leader. He mistrusted the new arrival Ultra Magnus and led the Autobots in a frontal attack on Galvatron that was easily shaken off. After forming an alliance with Megatron and Soundwave, they were able to capture Scourge and trade him for Jazz, only to find him reduced to an aggressive zombie. Jetfire led a group of Autobots in coming to Ultra Magnus' aid against Galvatron, just before Hot Rod, Kup and Blurr destroyed Galvatron's cannon and convinced him to return to the future.

Shortly after, in The Gift, Jetfire was sent to provide back-up for Prowl and Trailbreaker in their attempt to stop the Decepticons sending a transmission to Cybertron. Jetfire ignored Prowl's order and made a futile attack on Kickback, allowing Soundwave to send the message. Not long after, he and Jazz were guarding a fuel shipment for G.B. Blackrock when they were attacked by Thrust and Bombshell. Jetfire rallied to put out an electrical fire, saving lives. The experience caused him to consider that his Earth origin meant he reacted better when called upon to protect humans than fellow Autobots.

In Funeral for a Friend, Jetfire was among the recalled Autobots who attended the funeral of Optimus Prime.

Jetfire was part of the gathering of senior Autobots who assembled to discuss who should succeed Optimus Prime as leader. Grimlock interrupted the gathering to put himself forward as a candidate. The Autobots quickly rejected him and his belief that only strength mattered, but they changed their mind when Grimlock helped save them from an attack by Trypticon and Jetfire offered him the leadership.

Jetfire and the other Autobots soon came to regret the decision when subjected to Grimlock's bullying style of command and lack of interest in protecting humans from the Decepticons. When the renegade Blaster returned to the Ark, Jetfire offered to lead aerial troops in deposing the Dinobots but Blaster chose to surrender rather than risk the lives of the human children who had helped him. Jetfire was later present for the duel between Grimlock and Blaster on the lunar surface and the subsequent battle against Ratbat's Decepticons.

With Optimus Prime having returned, Jetfire, accompanied by the Aerialbots, was among the first to respond to a distress call in the arctic from Buster Witwicky, which resulted in them battling two Decepticon factions. In fact, they had all been manipulated by Starscream, who obtained the power of the Underbase and launched an attack on Earth. With the Autobots and Decepticons having made a truce, Jetfire was part of a unit led by Blaster and Ratbat who protected New York, only to be among those killed by the super-powered Starscream.

As well as Jetfire, Skyblast is a homage to Skyfire.