Skylar Lewis is the main protagonist of the 2012 Disney Channel Original Movie, Girl vs. Monster. A fearless teenager with a powerful voice. She gets prepared for The Ultimate Halloween bash with her best friends, Henry and Sadie. Skylar is a 16 year old girl, who discovers that her parents are 4th generation monster hunters and she is a 5th generation monster hunter.

She is portrayed by Olivia Holt.

Skylar is a fearless teenager with a positive attitude. She does not back down to things easily. She is not easily frightened and anything from a school project to a cemetery is faced with no fear from for Skylar. Skylar also has a very strong and powerful singing voice to showcase her bold attitude even more!

Skylar is a teenaged girl who comes from a long line of monster hunters. Ever since she was little, she has been taught not to have fear to prepare her for her hunting. Also, the monster that feeds on Skylar's fear, has been trapped away for all her life. Skylar's parents, aside from monster hunting, study mould for a living.

On Halloween Eve, Skylar, now 15, is prepared to go to the ultimate Halloween bash with her friends, Henry and Sadie, and sing her heart out with rock band cutie, Ryan Dean. Skylar's plans are crushed when her parents make her stay home, but not for what Skylar thinks, for her own safety. They leave Skylar with a babysitter/watcher, Cobb.

A stubborn Skylar, now angry, disobeys her parents and sneaks out the house. At the same time, she manages to accidentally release 20 years worth of captured monsters. Scared, Skylar flees with Cobb, along with her friends, as they get approached by Deimata, a powerful monster who plans to finally stop Skylar and her parents.

Skylar soon finds out that her parents are monster hunters and have been hunting monsters for years.

Now, realizing that it is up to her to save her parents, Skylar and her friends must conquer all of their fears and fight the monsters. But not experiencing fear for all of these years, it finally hits Skylar and she's not prepared for it.

Sadie and Skylar are best friends and she helps out Skylar out when she has 15 years worth of fear in 1 night. Together, she, Henry help Skylar fight off the monsters.

Henry and Skylar are best friends. They all work together to fight off monsters.

Deimata is Skylar's personal monster that wants to destroy her parents and possess her soul for all eternity. 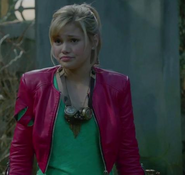 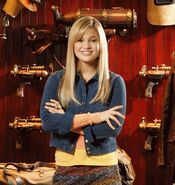 Skylar as a baby.

Skylar crying as a baby.

Retrieved from "https://hero.fandom.com/wiki/Skylar_Lewis?oldid=1888990"
Community content is available under CC-BY-SA unless otherwise noted.