Defeating villains and protecting the Earth and New Vestroia.

To protect Earth and New Vestroia from evil threats.

She given to Shun as a gift from his mother. Shun realized that he can't go on living alone and needed his friends to help him through. His tear fell on Skyress's old ability card and it changed along with Skyress. She evolved into Storm Skyress and Shun were able to defeat the Ventus legendary soldier of Vestroia, Oberus. After that, Shun and Storm Skyress are the last to battle Dan to help Drago evolve. After a very close battle, Dan won and Drago evolved.

She was captured by the Vexos and turned to statue by Prince Hydron until he was freed by Shun, Marucho and Mira. Skyress declined to join her former partner and decided to stay in New Vestoria. She was later used by Shun against Lync and Aluze and defeated them from getting the Ventus Energy.

Near the end of Arc 2 she was seen with an army of Bakugan trying to protect New Vestroia from Mechtavius Destroyer. She was fighting alongside Ingram and Taylean but ended up being destroyed with the both of them. Because the Brawlers used the Current of Time to go back before Mechtavius Destroyer killed her, she is now most likely living peacefully on New Vestroia. 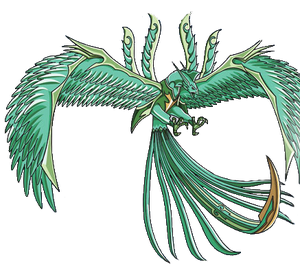