Eating his life and destroying the Kraang

He was voiced by Corey Feldman who also voices Sparx.

Slash started out as Raphael's pet turtle name Spike. Raphael would take care of Spike and the two real close. So close in fact, that Spike respected Raphael's abilities. He also grew to resent Raph's brothers as he felt like that they were holding Raphael back.

Spike ended up getting mutated in the episode Slash and Destroy when Raph confiscated Donny's last batch of mutagen because Donny's experiment almost killed Spike. The mutagen can fell off Raph's dresser and Spike went into it and became another mutant. Upon meeting Raph, the two became best friends. He armed himself with a mace, started wearing a black bandana, and renamed himself Slash, revealing that he never liked the name Spike. However, his villainous side began to show while Slash and Raph went to hunt for mutagen, saying that they "need to lose some dead weight," referring to Raph's brothers. Behind Raph's back, Slash kidnapped and beat up Donny and Mikey, but when Raph showed Slash he cared more about his brothers than finding the mutagen, Slash began to turn against him. This led Raph to start calling Slash a "deranged, hideous monster" with a warped brain and made of pure evil. However, Raph showed remorse when he defeated Slash by pushing him off a building with help from Leo. But he survived.

Later on, Slash, along with the other mutants, including Kirby O'Neil, Spider Bytez and many others, ended up getting captured by The Kraang. The Turtles decided to break all of the mutants out. When Slash was released, he processes to destroy a large portion of the Kraang. When one of the Kraang was about to shoot Raph, Slash intervened and attacked it. He then looks at Raph and nods at him, indicating that he still respects Raph. Slash then jumped into the Kraang portal and returned to New York.

Some time after Slash escape the Kraang prison, he ended up getting captured by the Kraang again. However, Slash ended up being rescued by Newtralizer. After being rescued, Slash decided to partner with the Newtralizer so he could destroy the Kraang. However, Slash also promised that they would complete their goals no matter what it takes. Both Slash and the Newtralizer were searching for plutonium so they could activate their teleportation devices, while at the same time destroy any and all Kraang who got in their way. At first, he didn't see the promise he made to the Newtralizer as a problem, but when he found out that the Newtralizer's plan involve the destruction of New York City, Slash began to question if what he was doing was right. When Slash, the Newtralizer, and the Turtles and Casey Jones found out that the Kraang were transporting a powerful alien walker, The Newtralizer took control of it and processed to attack the Kraang, the Turtles and Slash. Realizing the Newtralizer has gone too far, Slash decided to help the Turtles destroy the Kraang's Walker. After the Walker was destroyed, Raphael offered Slash to join them. Slash declined his offer, and said that he must go his own path, before teleporting away on good terms.

As Raphael's pet, Spike was a very happy and peaceful turtle who enjoyed to chew on his leaf and play with Rapheal.

However, after being mutated, he was granted the ability to speak and wanted to make his friend wishes come true as you would and granted himself a new name, Slash (as apparently he never liked the name Spike). The mutagen also warped his mind and he became the essence of psychopath who wanted to free Rapheal when the two decided to hunt mutagen canisters together but his true agenda was the elimination of Michelangelo, Donatello and Leonardo. Due to his massive weight Slash didn't possess the agility of a ninja but his size mixed with a great deal of brutality all but compensated for this. Slash was also handy with a mace and after years of watching Raph he could expect his movements.

Slash was also aggressive and hot-tempered, this was shown when he screamed in rage during his brawl with the turtles and yet again when he was captured by the Kraang and graphically threatened to rip off his captors tentacles one by one. Slash apparently resented Leonardo, proved again when he attacked Leonardo and remarked "I've been waiting to do that for a long time." When appointed the leader of the Mighty Mutanimals, he was eager to pick a fight with him, however, it is revealed in the climax of the episode he actually respects Leo, claiming that he was the best leader he knew.

Despite his brutal nature, in his third appaearance in the episode Newtrallzed! He formed a bond with Newtralizer as he freed from Kraang captivity and shared the same goal, the destruction of the Kraang. It is revealed that Slash isn't totally heartless and immoral, in fact he showed actual concern for the citizens of New York and was left disgusted by the Newtralizer's ruthless methods. Slash parted on good terms with Raphael and declined his offer to join the team, claiming he was better solo.

Given his fourth appearance, Slash is now the leader of the group called the Mighty Mutanimals who want to free New York City from the reign of the Kraang. Although a little argumentative with Leonardo, the two teams were able to work together and free New York.

Spike before he turns into Slash 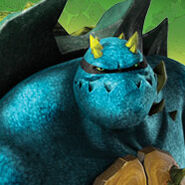 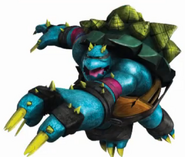 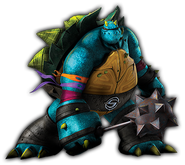