Heroes Wiki
Register
Don't have an account?
Sign In
Advertisement
in: Articles under construction, Male, Movie Heroes,
and 27 more

Dwarf
Sleepy is one of the seven dwarfs and one of the deuteragonists in Snow White and the Seven Dwarfs. He was voiced by Sterling Holloway in tests and Pinto Colvig in the original film and is currently voiced by Bill Farmer.

Hence his name, Sleepy is always weary, droopy-eyed, and is always eager to fall asleep. Most of the scenes featuring Sleepy showcases the drowsy dwarf struggling to keep awake in the midst of a colorful event taking place.

Though usually stricken with work-shyness, he is a hard worker, but also a bit of an amateur, as he often finds himself falling into accidental physical harm due to his lack of quick motion, such as whacking a deer's hide trying to catch a fly, or smacking himself with a cymbal doing the same.

However, in spite of spending most of his time nearly falling asleep, Sleepy is apparently the most observant and rational of the seven dwarfs, whether he knows it or not. He was the only dwarf to make the assumption that the Evil Queen may be attacking Snow White at the cottage when the forest animals frantically interrupted the dwarfs' mine work.

Sleepy is first introduced, with his six companions, at the Dwarfs' Mine. He controls the mine cart, presumably transporting the diamonds to Doc, who then sorts them. The cart is pulled by a deer. At one point the fly pesters Sleepy, who in an attempt to swat it accidentally hits the deer's backside; this causes the deer to kick the cart several times, sending Sleepy flying. As the dwarfs' march home, singing "Heigh-Ho", Sleepy is fourth in line. He is the only other dwarf beside Dopey not to join in the singing, as he is too tired.

When the seven dwarfs reach their cottage, they think that a monster has taken up residence in their house. They sneak into the cottage (Dopey peeking through Sleepy's beard) and search the room. The dwarfs note that the cottage has been cleaned. They decide that whatever is in the cottage is upstairs, and Doc declares that one of them must go upstairs to chase it out of the house. Dopey is elected, and Doc, his hand shaking, gives Dopey the candle. Dopey is so terrified upon entering the bedroom that, when he hears a noise coming from the beds, he screams and rushes downstairs. The other dwarfs think that he is the monster and rush outside, locking the door. Dopey falls into the kitchen and emerges from the cottage, covered in pots and pans. When the other dwarfs see him they, thinking that he is the monster, start hitting him. When they realize that it is Dopey, they decide to venture into the bedroom. They are about to strike whatever is sleeping in their beds when they realize that it is the princess, Snow White. Grumpy begins to complain, and Doc attempts to silence him, but Snow White is woken up. She manages to match the name at the foot of each bed to the correct dwarf, identifying Sleepy third.

Eventually, it is agreed that Snow White will clean and cook for the dwarfs if she is allowed to stay. She prepares soup for them but demands that they wash first. The dwarfs reluctantly march outside. Here, the dwarfs, led by Doc, when Sneezy dips his finger in the water, he blubbers shocking Sleepy and the other dwarfs except for Grumpy, wash while singing "Bluddle-Uddle-Um-Dum (The Dwarfs' Washing Song)". Next to Sleepy, the fly can be seen washing on the soap. Grumpy refuses to wash, but the other dwarfs, led by Doc, to drag him to the water and wash him thoroughly. Later that evening, after supper, the seven dwarfs entertain Snow White with "The Silly Song"; to begin with, Sleepy is once again bothered by the Fly, and attempts to hit it with a cymbal, succeeding only in striking himself in the process. After they finish the song, the dwarfs listen to Snow White sing "Some Day My Prince Will Come", which sends every dwarf, except the stubborn Grumpy, into a dream-like state. Doc declares that Snow White will sleep in the bedroom upstairs, and the dwarfs must sleep downstairs. As Sleepy settles down next to the fireplace, where Grumpy is sleeping in the kettle, the fly sleeps on his nose.

The next morning, as each dwarf leaves, he is kissed by Snow White. While the dwarfs head to the mine, the Queen, as the Witch, makes her way to the cottage, knowing that only Snow White will be at home. Upon her arrival at the cottage, the animals sense danger and, after attempting to drive her away, rush to the mine to fetch the dwarfs, where they try to warn them. When Sleepy suggests that the Queen has found Snow White, the dwarfs rush home to find that the Witch has succeeded in poisoning the princess and is about to leave. The dwarfs chase the Witch into the mountains, and she reaches a cliff. She attempts to crush the dwarfs with a boulder, but a flash of lightning causes her to fall from the cliff and be crushed by the boulder herself.

The seven dwarfs mourn Snow White's death; Sleepy is shown silently weeping with Bashful and Sneezy. The dwarfs find her to be so beautiful, even in death, that they fashion a coffin from glass and place her inside. The Prince arrives, and the dwarfs part so that he can approach Snow White. He kisses her, breaking the spell of the Sleeping Death, and the dwarfs cheer. Before Snow White leaves with the Prince, she kisses each dwarf on the forehead (Sleepy was never shown being kissed on the forehead, but possibly was last). 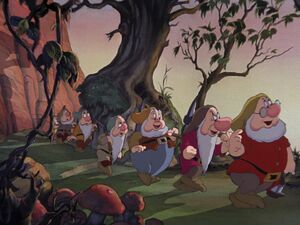 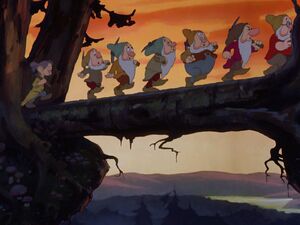 Sleepy and the dwarfs walking back home. 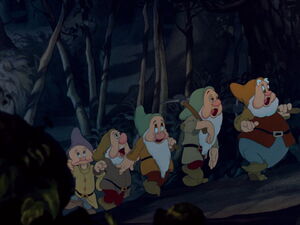 Sleepy and the dwarfs returning home. 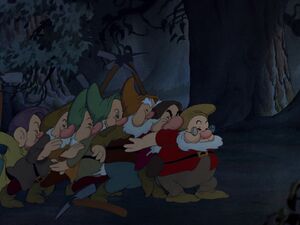 The line being halted by Doc. 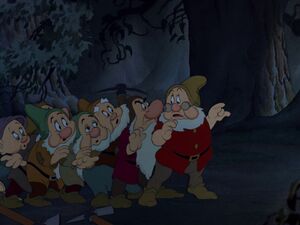 Sleepy informed that the lights are on inside their home. 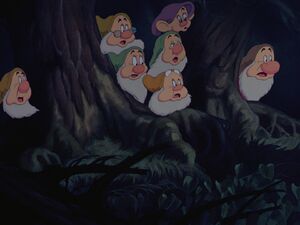 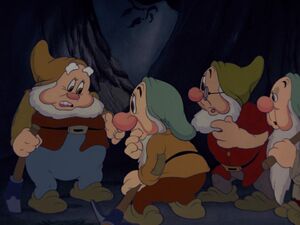 Sleepy and the other dwarfs decide to sneak up onto the house intruder. 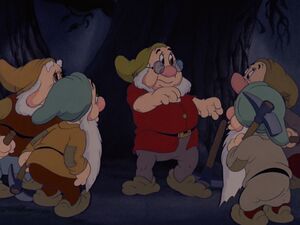 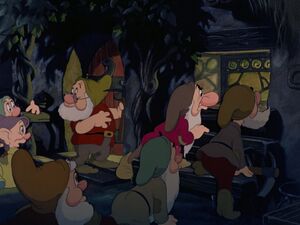 Sleepy and the other dwarfs approaching their cottage. 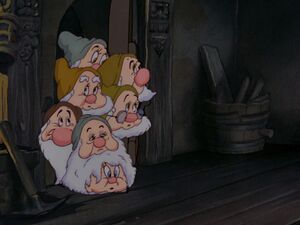 Sleepy and the other dwarfs peeking through the creaked open door. 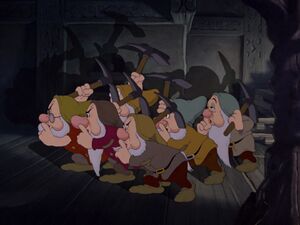 Sleepy shushing Dopey when he closes the door. 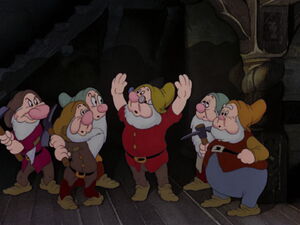 The dwarfs about to investigate the cottage. 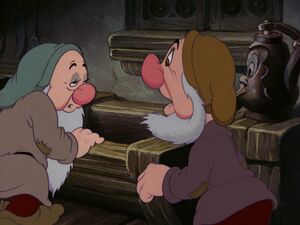 Sleepy and Sneezy seeing the sink is empty. 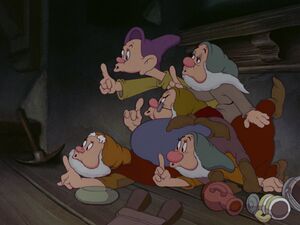 After being blown away by Sneezy when sneezed, Sleepy shushes him. 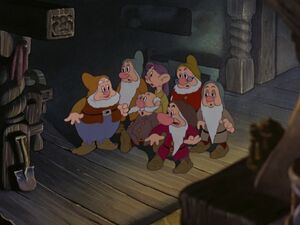 Sleepy and the dwarfs hearing a spooky noise which was actually caused by some birds. 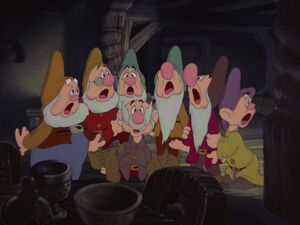 Sleepy and the dwarfs scared when the birds screech loudly. 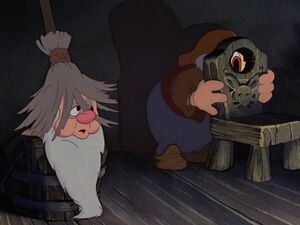 Sleepy with a mop on his head as he hides in a bucket. 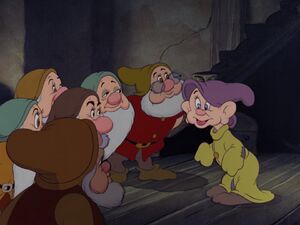 Sleepy and the other dwarfs glancing at Dopey. 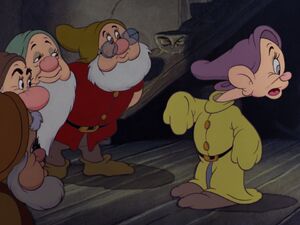 Sleepy and the dwarfs wanting Dopey to go upstairs and investigate. 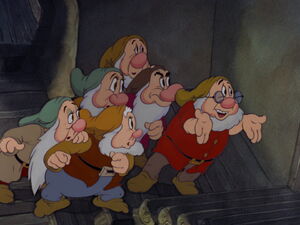 Sleepy and the other dwarfs watching Dopey go upstairs. 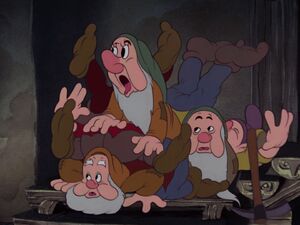 Sleepy and the dwarfs at the bottom of the stairs after a scared Dopey crashed into them. 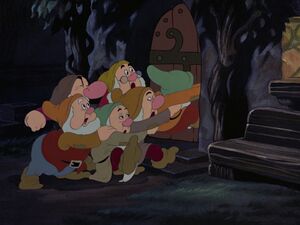 Sleepy and the other dwarfs trying to keep the door shut. 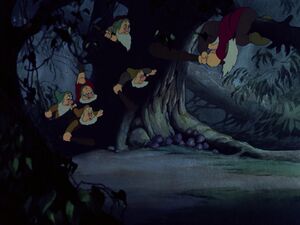 Sleepy and the dwarfs ready to attack the monster before realizing it was just Dopey. 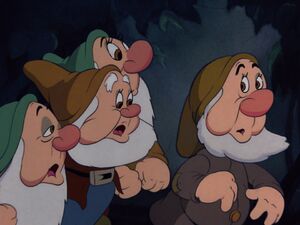 Sleepy and the dwarfs propose they attack the monster while its sleeping. 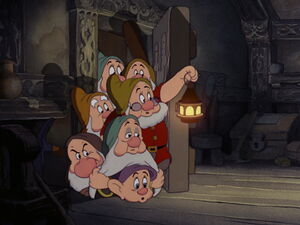 The dwarfs entering their bedroom. 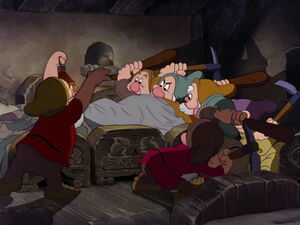 The dwarfs about to kill the "monster" as Doc removes the blanket. 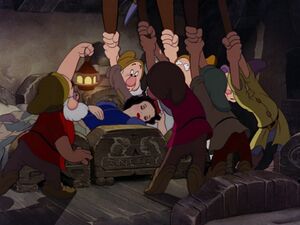 The dwarfs stop their attack when they see Snow White sleeping on the beds.