Eating what you see

Escape from the Ghostbusters (failed)

Throughout the first film, Slimer appears to lack intelligence and was all about getting a good snack. It was a normally shy ghost but is not afraid to slime when cornered. In the second movie, it appears that Slimer's intelligence grew and could drive a bus. So far, in the video game and cartoon he has grown in intelligence and seems to understand basic human concepts.

Slimer is classified as a focused, Non-Terminal Repeating Phantasm, or a Class 5 Full Roaming Vapor. And a real nasty one at that.

Slimer was a legendary ghost to all on the original staff of the Sedgewick Hotel. His usual territory was the twelfth floor, but his outings were usually non-violent and simply involved eating food. As a result, the hotel was able to keep a lid on the supernatural problems (for a while). For some reason, Gozer's approaching time of arrival provoked Slimer (and many other ghosts) into being much more active than usual. Eventually the staff couldn't keep the ghost a secret anymore and called the Ghostbusters. However, the Ghostbusters had not yet fully tested their equipment and weren't completely prepared for a full capture. Ray was the first to find Slimer, but missed him and Slimer escaped into the next hall, where he slimed Peter Venkman. After many errant shots and the resulting destruction, Slimer flew into the Alhambra Ballroom where the Ghostbusters made another attempt at capture. Though Slimer is at first tossed around by some more missed shots, the Ghostbusters eventually manage to get him in the streams. Slimer was then caught in the Trap and put in the storage facility. However, he was released with the many other ghosts when the storage facility was shut down. Slimer occupied a hot dog cart on on 1221 Avenue of the Americas in front of the Rockefeller Plaza. When the Hot Dog Vendor opened the cart, he was naturally shocked to see a ghost. After the Ghostbusters defeated Gozer and left Central Park West, Slimer was sighted in the area.

Slimer seemed to be a pet to the Ghostbusters, though it's unknown what he had been doing since the Ghostbusters were put out of business years ago. Slimer did resurface after the Ghostbusters started up again and had apparently gotten much fatter in the span of five years. Throughout the Vigo incident of 1989, Slimer interacted with Louis Tully. The two first met when Louis caught Slimer eating his lunch, to which the two of them fled in fear. On New Year's Eve, Louis decides to take up a Proton Pack and help the Ghostbusters. In an attempt to patch up their initial misunderstanding, Slimer helped an exhausted Louis by giving him a ride to the Manhattan Museum of Art (to which Louis wonders how he got his license). It seems likely Slimer had simply commandeered an abandoned bus from the havoc resulting from Vigo's Mood slime assault.

At some point, Slimer was recaptured and kept in a Paranormal Containment Research Tank in the Firehouse in the lobby. Egon Spengler used him for various paranormal studies (sometimes noted that this is a nod to The Real Ghostbusters shows take on Slimer). On Thanksgiving weekend 1991, Slimer was playing with Peter Venkman's ESP cards inside Paranormal Containment Research Tank.

The Psi Energy Pulse damaged the Tank and Slimer escaped. The team finds him looking at the Containment Unit. When the Rookie takes a shot, Slimer avoids it and the Proton Stream hits the Unit, releasing the Sloth Ghost. Rookie and Ray pursued Slimer into the Sub-Basement but it escaped through a wall. After the Sloth Ghost was recaptured, the Ghostbusters headed to the Sedgewick Hotel on Ray's hunch Slimer would return to his old haunt. Sure enough, Slimer was found by Ray, Peter, and Rookie eating and drinking off someone's tray in front of Room 1218. Rookie took a shot but Slimer ran for it and tried to hide. Rookie roused him out and Slimer flew off towards the elevators where he descended back to the ground floor (but not before sliming Peter for a second time). Slimer is joined by Bellhop Ghosts. With renewed paranormal activity, Egon opts to split up. Rookie and Peter are tasked with recapturing Slimer. Peter believes he's feasting in the Alhambra Ballroom but the manager John O'Keefe bars entrance. Peter regroups and leads Rookie through the kitchen to access the other entrance to the ballroom. Rookie and Peter successfully traps Slimer.

Slimer is placed back into a working Paranormal Containment Research Tank when the team returns from Times Square. When Peck shut down the containment grid again, Slimer is among the escapees. After the Ghostbusters destroy Ivo Shandor and return to the physical plane, Slimer slimes Ilyssa Selwyn just as she and Peter are about to kiss in Central Park.

Slimer fell into the Ghost Legion who allied with Michael Draverhaven. From a hangar at the JFK Airport, Michael kept Slimer at his side as he coordinated attacks on New York City and the Ghostbusters. He used Slimer's Ectoplasm to construct a simple map of the city and to restrain Ray. When the other Ghostbusters arrived, Peter relished the chance to take another shot at Slimer. In the aftermath, it appears he evaded capture and fled the hangar with the rest of the ghosts.

He is more like a pet in this version evidenced by three dog food bowls with him in the Paranormal Containment Research Tank. Much like the Realistic Version, he escapes from his tank when the Psi Energy Pulse passes through the Firehouse. However, he only stays shortly to waive goodbye to the Ghostbusters then leaves for the Sedgewick Hotel. Peter and the Rookie recaptures him and he is returned into another research tank. When the ghosts are released from the Containment Unit, Slimer escapes again but at the end of the game, Slimer doesn't slime Ilyssa. Instead, he reappears above the garage bay in the Firehouse. The credits roll while the Rookie(s) try to catch him again.

He is much like the normal Stylized Version. However, the relationship as a pet/research subject wasn't suggested in dialog.

Dealing with the Supernatural

After the "Shandor Incident," Slimer proved to be a problematic repeat haunter. He began terrorizing an apartment complex occupied by Alan Crendall, who thought it was a curse for what his Uncle Janosz Poha did in 1989. One week later, Alan told Winston about his problem. Winston and Peter investigated the following afternoon. While Winston scanned the Crendall's unit in room 426, Peter checked next door in 427. Peter ran into Slimer and flew through the wall into 426.

An hour or two later, Winston and Peter were still having an unusually difficult time in capturing Slimer. In a shocking display, Slimer was able to pull free from the Proton Stream. Using Winston as bait, Peter managed to ambush Slimer and trapped him. Slimer was returned to a Paranormal Containment Research Tank in the Firehouse. Egon later postulated the current uptick in P.K.E. made Slimer stronger than usual.

In the fall, after the Ghostbusters' trip across the nation, Egon used Slimer as a test subject for his studies on the Ghost Smashers. For several days, Egon experimented on explosive dispersal of mid-range ectoplasmic manifestations. Slimer proved to be an excellent test-subject. Egon concluded the time to reconstitution in a 180 cubic foot enclosure averaged at around three hours and 47 minutes. From that data, he extrapolated when the entities atomized by the Ghost Smashers would also reconstitute. When Egon wasn't looking, Peter dispersed Slimer for fun.

Slimer randomly appears in certain levels (Level 1: Training Day, Level 2: Asylum Brawl, Level 3: River of Ooze, Level 7: Back to the Sedgewick, and Level 9: Lair of the Huge Spider) but leaves after some time or taking a few blasts from the players. He is never dispersed nor trapped in the course of the story.

Continuing from the first movie, Slimer actually stuck around the Ghostbuster headquarters. He apparently was feeling lonely and the Ghostbusters were the only ones who paid attention to him. He mainly stayed hidden until being drawn out because of his appetite. The Ghostbusters at first reacted negatively to him, but as he hung around they started to tolerate him and even treat him like a friend. Ray gave him the name "Slimer" (just to annoy Peter). Slimer was finally accepted as a pet ghost after helping the Ghostbusters stop the Anti-Ghostbusters. Throughout the years, Slimer aided the Ghostbusters whenever a ghost was needed for the situation. Because he helped the Ghostbusters, Slimer had a large number of problems of his own. Many ghosts considered Slimer a "traitor" amongst ghosts for his compassion with the humans. This often put Slimer on bad terms with many villains who faced the Ghostbusters.

You capture Slimer once, at the start of the game.

Dan Aykroyd reportedly referred to Slimer as "The Ghost of John Belushi". In the script for Ghostbusters, Slimer is never actually called by any name, so is never given one. The creature's original moniker was simply The Onionhead Ghost, which the film crew semi-officially dubbed him because of his horrible odor, which he used to scare a couple in a scene cut from the original movie. When the cartoon series was produced, in response to the name much given to the character by audiences, the writers renamed the green ghost "Slimer", and the name stuck on all subsequent Ghostbusters properties (he was even named Slimer in the end credits of Ghostbusters II, but a character never actually referred to him as Slimer in the film canon until Ghostbusters: The Video Game), although he was referred to as "The Green Ghost" early in the related toy line. In later releases of his first figure, an extra label was applied specifying "Known as 'Slimer' in the 'Real Ghostbusters' TV show.

Slimer wasn't always a definite part of the Ghostbusters II script. It was a matter of considerable debate if he should appear at all. Slimer's appeal, luckily, was very universal among children thanks in part to the first movie and The Real Ghostbusters. Slimer was given a subplot and written into movie - Slimer would eat various foods in the Firehouse while Louis Tully would try to trap him then they would become friends. Michael Gross requested elements of the animated version of Slimer to be incorporated into the movie. Tim Lawrence and Thom Enriquez worked on a new design. Meanwhile, Bobby Porter was called into portray Slimer. Some of the technology and techniques used for Nunzio Scoleri were used for Slimer - the divided head construct, pneumatic jaws, SNARK and a fat suit - a departure from the first movie where he was hand puppeteered. Then Slimer was removed from the script. Porter was released.

Two weeks later, Slimer was back in the script and had a bigger role. However, Porter was no longer available. Effects ooordinator Ned Gorman remembered working with Robin Navlyt on "Willow" and she was brought in. Surprisingly, she was the same height as Porter and fit into the suit very well. Chris Goehe and his mold shop crew made a full lifecast on her and Al Coulter worked on a new skullcap. The Slimer shoot was finished close to the first day of shooting. Michael Gross was onhand to push the crew to keep Slimer subtle and reduce any complicated approaches to moving him. Slimer's segments were deemed intrusive by preview audiences. During editing, Ivan Reitman decided to limit Slimer's role even though all scripted scenes were filmed and completed. Ultimately, Slimer's scenes were trimmed to two brief shots plus one during the end titles. 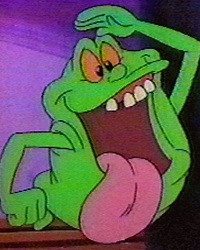 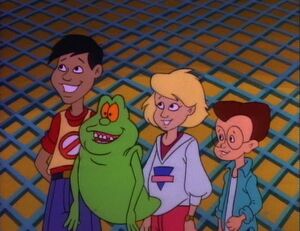