Slipstream is an Autobot Mini-Con and student to Drift and partnered with Jetstorm in Transformers: Robots in Disguise.

Back on Cybertron, Jetstorm and Slipstream use to live their lives as theives until they were saved by Drift.

In One of Our Mini-Cons Is Missing, after accidentally polishing Drift's sword incorrectly, Jetstorm fled in an escape pod rather than face his master's wrath. Arriving on Earth, he intended to become a student to Russell. However when Drift and Slipstream came in search of him, he conceded that he would be more useful in the fight teamed with them. Russell continued to stick up for Jetstorm, and following a run in with Quillfire and Springload who had commandeered a giant tank. Russell convinced Drift in listening to Jetstorm and after Quillfire and Springload were captured, Drift accepted Jetstorm's apology. Drift decided he and his wards would stay with Bumblebee's team to learn cooperation.

In Deep Trouble, the two Mini-Cons took part in a little obstacle course in the scrapyard and emerged victorious, which they celebrated and made Drift impressed. Soon they accompanied their master and Bumblebee's team to a derelict ship at the bottom of the sea off the coast where they attempted to capture Octopunch. While moving through the ship's corridors, they became trapped with their master and Sideswipe. They attempted to spend their time in captivity meditating, with few distractions from Jetstorm, Slipstream, and Sideswipe, which they were scolded by Drift. Eventually, they were eventually able to escape the self destructing ship to go back to the scrapyard with Octopunch placed in a stasis pod.

In The Trouble with Fixit, Jetstorm and Slipstream tried to help the Autobots search for Fixit in the scrapyard and accompanied Sideswipe in locating Fixit, who was stuck in a vocal rut outside of the scrapyard where the Alchemor had crashed and he kept on repeating the word "escape". After a bear attacked them and it retreated, Sideswipe knocked Fixit out of his vocal rut and they headed back to the scrapyard. Jetstorm and Slipstream aided Denny Clay in operating on Fixit but were forced to leave when they were discussing about possible outcomes of the procedure. They were the first ones to be blasted by Fixit, who was stuck in his original command programming. Later, they were stuck in containment fields along with their master until they were freed as they joined in on the chase of chasing Chop Shop and Fixit. Jetstorm was involved in the Autobots dog pile over Fixit but failed. After Fixit was repaired by Denny, the team was relieved.

In Lockout, Jetstorm and Slipstream took part in helping the Autobots defend the scrapyard from Steeljaw's pack and they faced against Fracture's Mini-Cons while Russell and Denny prevented the Decepticons from freeing the other imprisoned Decepticons from their stasis pods.

In The Buzz on Windblade, Jetstorm and Slipstream managed to cut the power in a plan to capture Zizza. They were successful and high fived each other.

In Ghosts and Impostors, Jetstorm went along with the other Autobots to a town called Edmondville, in Bumblebee's hopes of giving them an impression on Earth. After pranking a group of human tourists and witnessing their master disguised as a ghost, which made the Autobots, Jetstorm, and Slipstream giggle, they were on a hunt for Pseudo. When Pseudo disguised himself to look like Drift, the real Drift deployed Jetstorm and Slipstream while Pseudo could not. The team ened up chasing Pseudo and Grimlock threw the Mini-Cons at the Decepticon which had worked succesfully in preventing Pseudo from escaping. The team witnessed the sunset before leaving back to base.

In Battlegrounds, Part 1, Jetstorm and Slipstream were reattached to Drift as they were trying to locate Sideswipe, Strongarm, and Windblade.

In Battlegrounds, Part 2, Jetstorm and Slipstream were deployed to stop Megatronus from getting to their master and the other Autobots. They were saved from fighting him by Optimus and attended to their master. During a fight with Steeljaw's pack, Jetstorm and Slipstream were deployed by Drift to tackle Clampdown. Later, they took part in removing the statue's arm with the help from Sideswipe, Windblade, and Drift, where they successfully dropped the arm on Megatronus. After seemingly destroying Megatronus, the team headed back to base where Drift and his pupils desired to contiue their education besides Bumblebee.

In Overloaded, Part 1, Jetstorm and Slipstream along with Strongarm listened to Optimus tell old war stories. When Drift was assigned to an "away team" to hunt Decepticons far from the scrapyard, the two Mini-Cons naturally went along as well. During the first mission to the Arctic, they had to help Optimus after the Autobot, weakened after the Primes took away his extra power, was left clinging to a cliff.

In Overloaded, Part 2, they were able to prevent Optimus from falling, but later became frozen to Drift's arms and unable to be deployed.

In Cover Me, Drift unleashed the pair on Swelter and Glacius, but the evil Mini-Cons turned out to be too much for them to handle. They accompanied the Autobots to a military base, where they were trapped in a metal cocoon with their master and Sideswipe.

In Graduation Exercises, while investigating possible interference with one of Windblade's caches, Sideswipe fell for the cache's force field which prompted Jestorm to tease Sideswipe in taking the point. After checking the cache, Optimus's team soon found themselves up against Stockade and his army of Mini-Cons. Jetstorm and Slipstream disregarded their master's order to link back up, indirectly resulting in Drift sustaining an injury. The guilty pair ended up trapped in an armory with Sideswipe, where they not only told Sideswipe about their mistake but also realized they were able to link up with the Autobot. After the trio aided the rest of the team, resulting in Stockade's defeat, Drift told the two Mini-Cons that their training was complete, however they insisted on remaining his students. When Grimlock came in to collect Drift, the Autobots returned to the scrapyard.

In Decepticon Island (Part 1), Jetstorm and Slipstream were present when the Autobots ran into Ratchet, who promptly joined the team. Drift carried them as the Autobots used a ruse to infiltrate the wreck of the Alchemor, which was being used as a base by a group of Decepticons.

In Decepticon Island (Part 2), as Drift and Ratchet attempted to rescue a captive Windblade, the two Mini-Cons were able to deploy and avoid being trapped in a stasis pod with their master. They freed their fellow Autobots who were able to defeat Overload, and the group escaped from the ship before the cryo-gas bomb put everyone on board in stasis. Drift and his Mini-Cons later opted to stay on Earth under Bumblebee's command.

Jetstorm appears to be younger than his partner Slipstream. Jetstorm is fairly mature but can be enthusiastic in celebrations. He tries everything he can to prove to his master his capabilities and skills. He is a skilled fighter and warrior, especially against Fracture's Mini-Cons. He, as his master stated, still has much to learn. Jetstorm knows to follow his master and stays by his comrades side.

Along with Slipstream, Jetstorm is capable of getting involved in Mini-Con sized situations. He is equipped with nun-chucks and is able to take on opponents, such as Fracture's Mini-Cons.

Drift respects, cares deeply, and watches out for Jetstorm and acts a lot like a father figure to him.

Jetstorm is Slipstream's fellow partner and friend. They both were saved by Drift from living lives of stealing. Slipstream appears older than Jetstorm, as Slipstream would often advise or look out for Jetstorm the most. They would celebrate on occasions and would also high five each other in successful tasks they have performed. In Graduation Exercises, Jetstorm and Slipstream both grieved over their mistake in ignoring Drift to prove themselves against Stockade's army. When the Decepticon and his army were defeated, Drift told his students they are finished but they both choose to stay with him.

Slipstream cares, respects, and acts like an older brother figure to Jetstorm.

Russell was able to get Drift into complimenting both Jetstorm and Slipstream for their performance in combat. Russell was also able to convince Drift to accept Jetstorm's apology. Jetstorm would refer to him as "commander" Russell. Russell has a good close friendship with Jetstorm.

Since he is another fellow Mini-Con, Fixit gets along well with both Jestorm. They appear close friends and teammates.

Jetstorm interacts the least with Denny. In The Trouble with Fixit, Jetstorm and Slipstream assisted in helping Denny operate on Fixit but were forced to leave the room when they mentioned possible outcomes of the procedure. However, they appear to have a stable friendship.

Bumblebee acts like a mentor to Jetstorm. He cares and respects Jetstorm and acts like another adult figure to him.

Even though they are barely seen to interact, Sideswipe appears to act like an older brother Jetstorm.

Strongarm acts like an older sister to Jetstorm. She gives Jetstorm advise and cares for him like she does with Slipstream.

Jetstorm and Grimlock have a good friendship. They care and look out for each other as comrades and teammates.

Windblade is an ally and teammate to Jetstorm. She looks out for Jetstorm and cares for him.

Optimus told Jetstorm, Slipstream, and Strongarm some of his old war stories in Overloaded, Part 1. Optimus seems to regard Jestorm with respect and acts like a mentor to him.

Jetstorm despises Airazor and Divebomb. Jetstorm and Slipstream fights them on some occasions, like in Hunting Season and in Lockout. While Airazor and Divebomb dislike them as well, Airazor appears to be a dark version of Jetstorm. They both have simplistic traits and appear younger. 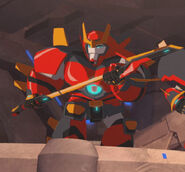 Retrieved from "https://hero.fandom.com/wiki/Slipstream_(Transformers:_Robots_in_Disguise)?oldid=2262671"
Community content is available under CC-BY-SA unless otherwise noted.