Slobber Tooth is a turtle dinosaur in Skylanders: Swap Force.

He is voiced by Dave Fennoy who also voiced Thunderbolt.

Having been asleep for thousands of years, Slobber Tooth was awakened by the fiery eruption of two volcanic islands crashing together. Immediately sought out by Kaos to become one of his minions, Slobber Tooth was promised great power. But the gruff and headstrong fighter chose to follow his own path instead. For this, Kaos attacked his ancient petrified homeland. As the only one who could protect his hibernating race, Slobber Tooth fought tooth and tail against Kaos and his minions, ultimately driving them away. For his heroism, Master Eon asked Slobber Tooth to join the Skylanders, where he could continue defending Skylands against the evil Kaos. 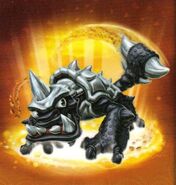 Dark Slobber Tooth.
Add a photo to this gallery
Retrieved from "https://hero.fandom.com/wiki/Slobber_Tooth?oldid=1693382"
Community content is available under CC-BY-SA unless otherwise noted.