Save the Goonies gang from his family (succeeded).

Lotney "Sloth" Fratelli is a character from the 1985 film The Goonies.

He was helping Chunk to find his friends, and he saves him from the Evil Fratellis. Later in the movie, he fought with Mama's evil sons. He then hugged Mama and threw her in the water.

He was played by the late John Matuszak.

He has a superman shirt and a very deformed face (Apparently the result of having been repeatedly dropped on his head when he was a baby, and he seems to have some level of mental retardation for the same reason) with just one hair. He rescues the Goonies on One Eyed Willy's pirate ship. He talked with Chunk in Fratelli's basement. Later Chunk gave him a Baby Ruth chocolate bar when he said Chocolate, then kissed Chunk on the cheek.

In the end of the film he was watching the Goonies again to sit on the rocks and watching One Eyed Willy's Pirate Ship.

A figure of Sloth was made for the toys-to-life video game LEGO Dimensions in Year 2 of its production. Sloth is a playable character, who comes with the LEGO Dimensions Goonies Level Pack, featuring two support items from the movie and unlocking the Goonies level for play.

Sloth scaring Chunk. He can be seen wearing an Oakland Raider T-shirt, due to his actor, John Matszak, being a former football player for that team. 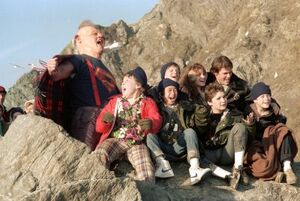 The Goonies in the film 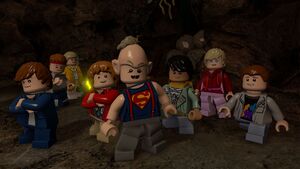 The Goonies in LEGO Dimensions 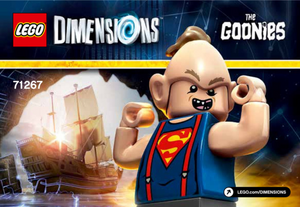 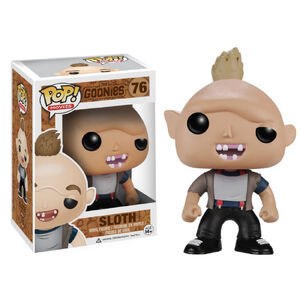