Nextline to the Great Thief of the Cooper Clan

Leader & founder of the Cooper Gang

Capable with his cane

Sly Cooper is a raccoon thief and the titular main protagonist of the Sly Cooper game series. He teams up with Bentley and Murray to plan perfect heists and avenge his father. He does have a friendly rivalry with Carmelita Fox. In the third game, he teams up with Dimitri, The Guru, Penelope, and the Panda King to defeat Dr. M.

He is voiced by Kevin Miller in the game series.

Sly came from a long line of thieves who dedicated their lives to thieving and writing down their greatest accomplishments and skills in a book called the Thievious Raccoonus. ​Little did they know that they were being watched by an ancient bird, Clockwerk, who had such an immense hatred for the Coopers that he replaced his body with robotic parts to keep him alive and continued his hatred towards them.

On the night when Sly was eight, he was about to be given the Thievius Raccoonous by his father and previous thief before him, Conner Cooper. However, Clockwerk appeared and attacked Sly's house, along with the help of four criminals who formed the Fiendish Five, ​a criminal organization, founded by Clockwerk. Sly hid in the closet, horrified as the Fiendish Five killed his parents and made off with stolen pages of the Thievius Raccoonus. After that incident, Sly wounded up in an orphanage where he met Bentley and Murray, becoming good friends with them and forming the Cooper Gang as of today.

​Sly Cooper and the Thievius Raccoonus

Sly and his friends, known as the Cooper Gang, break into a police headquarters in Paris to steal a case file about the Fiendish Five. While attempting to escape with it, however, Sly Cooper runs into Inspector Carmelita Fox who Sly encountered in Bombay when he stole the Fire Stone of India there. Carmelita tries to stop Sly with her shock pistol, but Sly manages to escape her as he rides away with his gang in the Cooper Van.

After successfully stealing the case file, Sly studies it and learns about the Fiendish Five's chief machinist member, Sir Raleigh, who was a bored aristocrat later turned pirate, residing in the Isle of Wrath, Wales, using a storm device to cause several ships to sink for Raleigh to raid for their treasure. In order to get to where the Fiendish Five members are, Sly must collect keys, hidden in levels, throughout the Fiendish Five's base of operations. After Sly collects the keys to use a cannon to fire himself at the blimp where Sir Raleigh is at, Sir Raleigh encounters Sly and sarcastically welcomes him, only to angrily tell him that he hates guests. Sly, on the other hand, threatens Sir Raleigh to expect company after he reminds him about attacking his home and killing his parents. Sir Raleigh mocks Sly as he says that he and the Fiendish Five should have finished him off as well. He then fights Sly as he swallows a bee that turns him gigantic and then tries to crush him. After Sly defeats him, Sir Raleigh brags about his defeat, but then warns Sly that he is no match against Muggshot, his villainous cohort in Mesa City, Utah, and says that his hideout so is heavily guarded that a snake couldn't slither in without setting off alarms. Sly then finds Sir Raleigh's section of the Thievius Raccoonus, containing information about his ancestor, Rioichi Cooper's technique, Ninja Spire Jump. As Sly leaves Sir Raleigh's hideout and leave Sir Raleigh at the custody of Carmalita Fox, he and his gang go to London, England, where he is seen stealing crowned jewels as Bentley and Murray are seen distracting a royal guard.

As the Cooper Gang are on their way towards Mesa City, Utah, Sly studies Muggshot who was once a runt later turned to musclebound brute after watching his first gangster film called The Dogfather. After Sly enters Muggshot's casino and faces off with him, Muggshot is surprised to see Sly as underwhelming after he heard news from his boys about Sly breaking in and attacking the place. Muggshot then notices the cane Sly is holding and mentions how he's seen it before. As Sly mocks Muggshot about his father knocking his block off with his cane, Muggshot soon realizes that Sly is a Cooper and then brags about the Thievius Raccoonus having a lot of nice pictures, but way too many big words. Sly then asks Muggshot if he will hand it over. Muggshot, however, tells Sly that he feels transgressed and violated after he mentions him trashing the place and stealing his stuff. As Muggshot faces Sly, he grabs out two guns and shoot Sly with them. Sly manages to defeat Muggshot by reflecting mirrors with beams at him, disabling his guns. As Muggshot lies in defeat, he woes about Sly being a puny pipsqueak beating Muggshot as a big strong bruser. He then threatens Sly about facing Mz. Ruby in Haiti, in order to get her section of the Thievius Raccoonus. Sly Cooper finds Muggshot's section of the Thievius Raccoonus about "Tennessee Kid" Cooper's rail walk technique. He then goes to Hollywood, California, stealing gold stars from the Hollywood Walk of Fame.

Being a raccoon, Sly has gray fur with black stripes and mask. His ensemble consists of a blue elbow-sleeved shirt with a yellow collar, blue boots, blue gloves with yellow cuffs, and a blue cap. Around his waist is a belt with the buckle shaped in the form of the Cooper symbol. On his back is a small red backpack for storing away items and keeping his calling cards.

In Sly 2 and Sly 3, Sly forgoes the backpack for a red leg pouch attached to his left thigh.

In Sly Cooper: Thieves in Time, with the exception of looking a little older and more mature, Sly now wears a red backpack like he did in Sly Cooper and the Thievius Raccoonus for his paraglider, and the red pouch on his leg has been replaced by a brown pouch. His belt buckle also has gold trim around the Cooper symbol. His backpack also has a Sanzaru Games logo on it.

Sly Cooper is, as the first game describes him, a "cunning, devious, Thievius Raccoonus." He uses his quick wit, his courage, and his skills to pull off jobs, and he usually has a sarcastic remark in hand as a very cynical laid-back raccoon. Despite being slick with the comebacks, he's not so swift with the ladies, with his girlfriend Carmelita continuously furious with him. However, he remains loyal and dedicated to his friends; especially Bentley and Murray, his two close friends since childhood, and Carmelita Fox, his love interest. Deep inside that demeanor he holds, it's possible he's a bit lonely, as he said that he misses his father at one point in the comics. But he never dwells in the past, and stays in the present, to seek for his next adventure.

In the beginning of the series, Sly is very arrogant and driven by his own personal goals. On occasion he is heard scolding Bentley and Murray (when failing missions). He disregards Bentley's advice and warnings, and was sometimes rude to Murray.

By Band of Thieves, Sly had matured a ways in which he appreciates his team. He is much more respectful of his team than he was in the first game. He fully came to appreciate them after being captured by the Contessa.

Honor Among Thieves came and Sly was an entirely new thief. With the sarcasm, witty banter, quips, and debonaire charm still in tact. He can't imagine his life without his team. Throughout the game, he takes the feelings of Bentley and Murray seriously, always on the look out for when they were bothered or sad.

Sly's primary weapon in the series is his family's cane, which is a brown staff ending in a golden hook. Many of his ancestors also had weapons incorporating the trademark hook, and the cane has become an infamous symbol of the Cooper Gang. Sly is also very capable with his cane and is a powerful opponent in a fight, repeatedly being shown beating opponents much larger and better equipped than himself.

Years of training and natural ability passed down through the Cooper bloodline have given Sly vast agility, balance, and reflexes, allowing him to perform feats that few can equal. In addition, he has learned every ability detailed in the Thievius Raccoonus, including balancing on the tops of sharp points, rope and pole climbing, invisibility, swinging on hooks, and running on wires. His skills include parkour, gymnastics, pickpocketing, safecracking, mastery of disguise, time manipulation, and others. 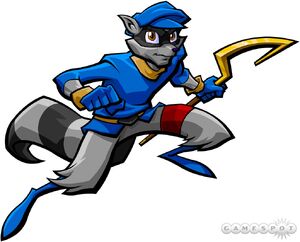 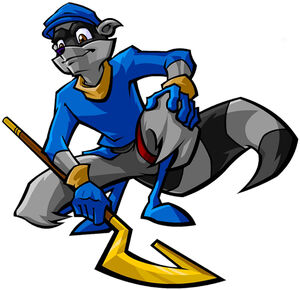 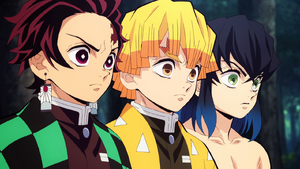 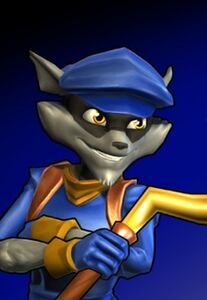 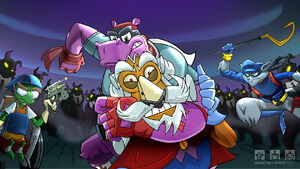 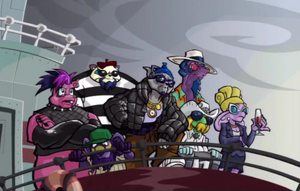 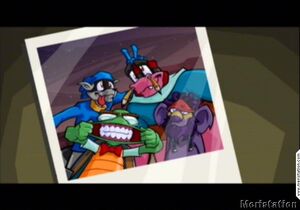 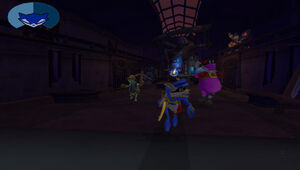 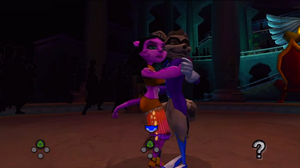 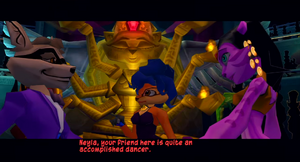 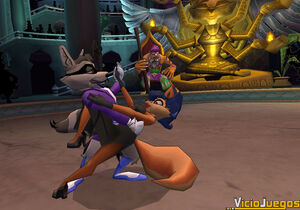 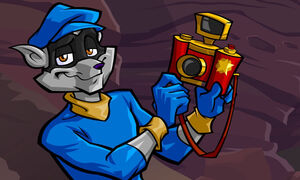 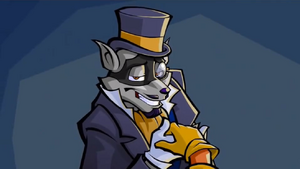 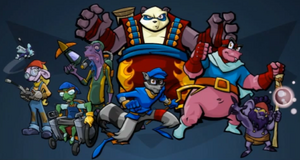 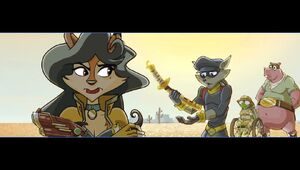 Retrieved from "https://hero.fandom.com/wiki/Sly_Cooper?oldid=1754795"
Community content is available under CC-BY-SA unless otherwise noted.