To capture Monkey D. Luffy at all costs
To serve the Marines (currently)
Abolish the Shichibukai System (a goal shared with Fujitora, succeeded)

Smoker the White Hunter is a recurring heroic antagonist that appears in the series One Piece. He was a Marine Officer that was then promoted to a Vice Admiral after the timeskip. Smoker also served as the main antagonist of the Loguetown Arc.

Smoker is a Marine Vice Admiral and Commander of the G-5 Marine Base. He has the powers of the Smoke-Smoke Fruit. He is a recurring adversary of Monkey D. Luffy and the Straw Hats. He is the primary antagonist of the Loguetown Arc and the a minor antagonist of the Marineford Arc.

Smoker is very serious and takes his job in the Marines very seriously. Smoker greatly despises pirates as he thinks all of them are nothing but "scum". Smoker also doesn't trust any of the Shichibukai saying "pirates are still pirates".

However, Smoker has been shown to have a soft side as he gave money to a young girl after she accidentally spilled ice cream onto him. Smoker is also honorable as he willingly let Luffy and his crew go after Luffy ordered Zoro to save Smoker from drowning.

After seeing Luffy had survived being excuted and smiling before getting be-headed, Smoker saw Luffy as a threat and always tries to capture him by any means. Smoker commonly tracks down Luffy and tries to turn in the young pirate.

Smoker angrily cursed the World Government for covering-up the Alabasta Incident and deemed to him as a "hero". Smoker seem to be very close with the new Admiral Fujitora who also believe the Shichibukai should be dissolved. After Fujitora revealed the true incident at Dressrosa, Smoker felt relieved that Fujitora prevented the Government from covering-up the incident.

Smoker was born on the East Blue Sea Island known as Loguetown. It was famous for being the birthplace of Gold Roger, the man who conquered the Grand Line and became King of the Pirates. As a young boy, Smoker was present after Gold Roger was captured by the Marines and brought to Loguetown for his execution. He was shocked to see that Gold Roger didn't seem like a man defeated. He was shackled but walking through the streets as a hero and smiling. As he was about to be executed, he made the declaration that ignited the Great Pirate Era.

Loguetown was often overrun by pirates from the East Blue trying to go to the Grand Line to claim One Piece. Smoker joined the Marines as he grew up and at some time ate the Smoke-Smoke Devil Fruit. While in the Marines he wasn't what some would call a team player and was nearly expelled several times. Most of Marine command saw him as a trouble maker, and was stationed to his hometown once he reached the rank of captain.

Pirates were still coming to Loguetown, even twenty years after Gold Roger's death, but Smoker stopped all would-be pirates with the help of his young subordinate, Tashigi. Though most of the people were intimidated by Smoker, he cared deeply about them. When a little girl ran into him, spilling her ice cream on his pants, he gave her the money to buy a double scoop. Smoker went to the execution ground when he heard there was a pirate atop the gallows where Gold Roger died. He found the young pirate Straw Hat Luffy. captured by Buggy the Clown and joined by Alvida. Smoker planned a trap but watched as Buggy was ready to kill Luffy at the top of the execution grounds. To Smoker's surprise, Luffy was smiling in the face of certain death, just as he saw with Gold Roger. Luffy was still saved by a freak lightening strike and escaped the courtyard with his crew.

Smoker cut off Luffy to capture him. His crew ran on and Luffy clashed with Smoker. The young pirate was of little threat from Smoker's Logia powers. Just as Smoker was ready to give the final blow, he was halted by a mysterious cloaked man. Luffy and the Straw Hats ran from Loguetown to the Grand Line. Smoker looked to the Revolutionary leader, Dragon; and asked why he helped Luffy. He gave no answer as he left, and Smoker gave up his position to chase the Straw Hats along with Tashigi. 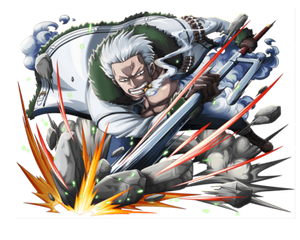 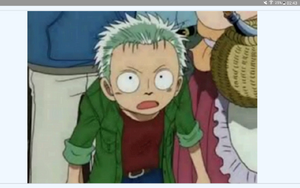 Smoker as a child 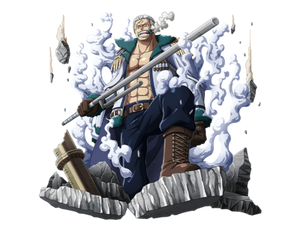 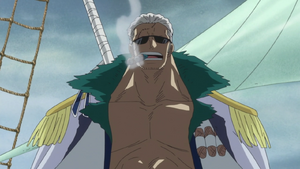 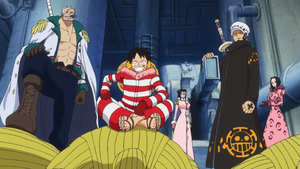 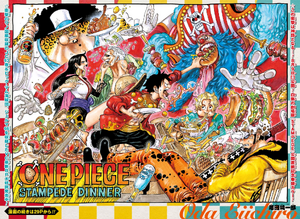