Rescue the Mini-Cons from the Decepticons

No information
Smokescreen, later known as Hoist, was a major character in Transformers Armada. A tough, steadfast Autobot, Smokescreen's iron will is pared with kindness, and a sense of humour, albeit with a tendency to act recklessly. After nearly dying and being rebuilt, Hoist was more careful and less jovial. He was voiced by Dale Wilson, who would voice Landmine in Energon, and Mudflap in Cybertron.

As seen in flashback in Prehistory, after the signal of the reawakened Mini-Cons reached Cybertron, Smokescreen wanted to join Optimus Prime's earthbound team, and leapt through the space bridge portal at the last second, and was separated from his comrades and deposited on a different part of the planet.

Smokescreen would eventually encounter the Autobots on Earth in Underground. He met the human children on the Autobots side in a semi-abandoned subway complex, while they were helping the Autobots search for the Mini-Con Drill Bit. However, he ended up scaring the kids, and accidentally attacked them with his crane hook. When the Decepticons surrounded the children, Smokscreen saved them from being buried in rubble. After Cyclonus retrieved Drill Bit, the Autobots dug Smokescreen and the kids out, and Hot Shot introduced them.

Guardian of the Skyboom Shield 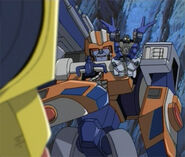