He was voiced by Richard Green and Kevin Michael Richardson.

Snare-oh is a mummy-like alien with a whole body made of bandages, He has a black and gold head-dress, Snare-oh has black bracers and greaves, Snare-oh also has green eyes and green glowing gaps between his bandages and has the Omnitrix symbol on his left shoulder. 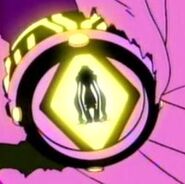