Hailing from the lost country of New Zealand and raised in the unforgiving Australian outback, the Sniper (real name Mr. Mundy or his birth name Mun-dee) is a tough and ready crack shot who prefers to pick his targets off from a distance, though he isn't afraid to get his hands dirty if the situation requires.

Preferring to hide in elevated or hard-to-see spots, the Sniper can pick off slow moving classes like the Heavy with ease. The Sniper is also ideal for eliminating enemy Medics and Engineers, giving his team a chance to advance.

While the Sniper tends to isolate himself from the frontlines, the Huntsman sees him move up the field, laying down suppressing volleys of arrows while his ancient and mysterious Jarate and Sydney Sleeper powers can increase damage dealt against his foes by himself and teammates alike. Although Jarate is a great weapon, it can also be used to put out fires.

The Sniper's primary weapon consists of a Sniper Rifle, which unlike the Soldier's Rocket Launcher, is not underpowered, being able to kill most classes with a single headshot. This trait makes the Sniper notably annoying towards enemy mercenaries. However, while this trait makes the Sniper sound overpowered, there is a major drawback: Scoping in makes the Sniper vulnerable to damage within his vicinity, notable by the Spy's backstabs or other classes' taunt kills. The Huntman, a bow and arrow that substitutes the Sniper Rifle and its varients, allows the Sniper to counter this drawback, and in exchange for sacrificing accuracy for better close combat performance. The Huntsman also enables the Sniper to preform his taunt kill known as Skew, in which he attempts to stab an unfortunate enemy mercenary with one of his arrows; this taunt kill is very useful, as it is the second fastest (after the Heavy's Showdown taunt kill), as well as enables a stun effect if an opponent runs into it initially, giving the Sniper plenty of time to preform the taunt again should it fail to kill the enemy mercenary the first time. Notable variants of the Sniper Rifle include the Hitman's Heatmaker, a silenced Sniper Rifle which builds focus for every kill and kill assist obtained by the Sniper as well as decapitating enemy mercenaries with successful headshots (making the Sniper's headshot quotes make sense), but deals less damage when performing a body shot; the Machina, which allows for the Sniper to penetrate multiple enemies with all shots, allowing for multiple kills; and the Sydney Sleeper, a sniper rifle which drenches enemies in Jarate for a variable amount of time depending on the charge built, but does not do critical damage from headshots.

The Sniper's secondary weapons are a SMG, which fires in rapid succession in a similar fashion as the Heavy's Minigun and the Medic's Syringe Gun, however the damage is not very high, which makes the Sniper inferior to close combat; and the Jarate, which sacrifices the SMG for being able to make enemies more vunerable to damage by coating them in urine and making all attacks by any means a guaranteed mini-crit. Using the Bushwacka will turn all attacks on the Jarate-coated enemies into guaranteed critical hits. The Jarate can also be used to extinguish a fire set on either a teammate or the Sniper himself.

The Sniper uses a kukri (a Nepalese machete) as his melee weapon of choice, which deals average damage for a melee weapon; it can be used to easily take out enemy Spies if they attempt to sneak up on him. A variant known as the Bushwacka turns all mini-crits into guaranteed crits, making it useful when combined with the Jarate, but does not deal random crits and makes the Sniper more vulnerable to damage.

Like the other characters, the Sniper is an anti-hero/anti-villain depending on whose side you're playing for. 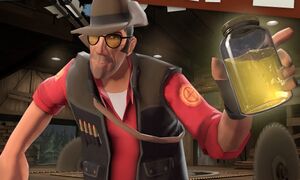 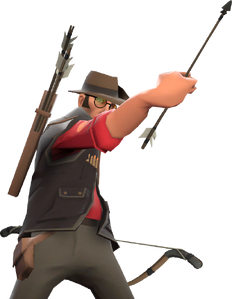 "Stab, stab, stab!"
Add a photo to this gallery

Retrieved from "https://hero.fandom.com/wiki/Sniper_(Team_Fortress_2)?oldid=1253600"
Community content is available under CC-BY-SA unless otherwise noted.