Sending snow down to Earth.

To have a White Christmas each year.

To make amends with his Stepbrother Heat Miser (succeeded).

Snow Miser is one of the miser brothers from the Rankin/Bass holiday special The Year without a Santa Claus, with the ability of controlling ice and snow over certain areas with cold weather. He frequently feuds with his half-brother Heat Miser. But in the second movie A Miser Brothers' Christmas Heat and Snow appear to be fraternal twin brothers.

He was voiced by the late Dick Shawn in the 1974 special and by Juan Chioran in the 2008 sequel who also voiced Ramón Molina in Arthur.

Snow Miser is the friendlier, more extroverted of the miser brothers (Rather fitting that the one who controls the world's cold weather would have a "Cool" and collected personality). He is at good terms with the Clauses and those is willing to do them a favor due to the belief that Santa Claus is "advertising" him.

According to himself, between him and his stepbrother, their mother Mother Nature likes Snow Miser better, something Heat Miser is really annoyed about.

In the sequel, it is revealed that since the Miser brothers began feuding, the two have been on Santa's Naughty List every year.

In his debut, Snow Miser initially acts more like an antagonist than as a hero.

Before Santa made the decision to take a year off from delivering gifts, Snow Miser often protected him and his family (largely due to "advertising" according to Heat Miser). When two of Santa's elves Jingle and Jangle attempt to take on Santa's job themselves using Vixen, Snow Miser fails to protect them, resulting in Heat Miser to shoot down the two elves with a high-temperature searchlight.

Later on, Mrs. Claus rescues the two lost elves and the reindeer, and all three travel to Snow Miser's palace in an attempt to have snow be brought to Southtown in order for the citizens to believe in Santa again. There, he begins to sing his signature song, and afterwards, he asks Mrs. Claus if she wants to request a snowfall in a particular city. Mrs. Claus responds with Southtown, resulting in Snow Miser breaking out in protest telling her that the town is under Heat Miser's territory. He tells them to travel to Heat Miser's palace to see if he is willing to make a compromise, to which Mrs. Claus, Jingle, and Jangle agree.

The trio arrive at Heat Miser's palace, where they ask if Heat Miser will let his brother Snow Miser have snow fall on Southtown. Initially Heat Miser refuses angrily, but then he decides to allow it under one condition: that he takes control on the North Pole for one day. Mrs. Claus calls Snow Miser about Heat Miser's proposal, but after hearing it, he refuses to allow the deal, causing both of the miser brothers to begin arguing and fighting. Mrs. Claus gets tired of their fighting, and is forced to travel to visit their mother about the situation, causing both brothers to become scared.

Mrs. Claus confronts Mother Nature about the problem, which after hearing the story, Mother Nature summons both brothers. There, she forces them to compromise telling them if they refused, that she would take disciplinary actions against the two brothers. Fearing the worst, Snow Miser and Heat Miser reluctantly agree.

The action ultimately results in Southtown's residents to believe in Santa Claus once more and for Santa to regain his hope and resume his job that year.

Snow Miser, alongside his twin brother Heat Miser return in the sequel, where they play a much more heroic role than their previous appearance.

In the beginning, Snow Miser and and Heat Miser are still in a feud with each other. They both reluctantly travel to Mother Nature's home in order to attend a family reunion. There, it is revealed that the miser brothers are more annoyed with their step brother the North Wind (Who Snow reference him as Mama's boy) than themselves. They also learn that should Santa be unable to complete his job, North Wind would replace him, an action North Wind attempts to make reality.

Soon afterwards, the miser brothers get into a fight with one another once more. This fight ends disastrous as Santa is caught in between the two miser's bolts, causing him to make a crash landing. As punishment, Snow Miser and his twin are forced to work at Santa's workshop while Santa recovers. There, it is revealed that the two brothers have been feuding since they were children, and that both brothers have been on the Naughty List every year since the feuding began. Now aware of the error of their ways, the two brothers reluctantly reconcile in an attempt for them to stop being on the Naughty List.

The two brothers end up turning from enemies to friends and begin cooperating together without incident, however, believing that his stepbrothers will end up foiling his plans, North Wind sends his minions to sabotage Santa's sleigh by installing heating and cooling vents in an attempt to make the miser brothers begin feuding again.

Initially it works, causing both miser brothers to accused the other of spending their influence across the world on Santa's flight. But one elf named Tinsel spots the act of sabotage by North Winds minions, and after coming across a Christmas card by North Wind, they soon learn of their stepbrothers evil intentions and attempt to warn Santa about it, but it is too late as Santa has already left, with North Wind following and conjuring a vortex to bring him down.

The Miser Brothers, alongside Tinsel confront North Wind using a team of young reindeer and stop the vortex just in time. Now caught red-handed, Mother Nature learns of North Winds actions and sentences him to household chores for the next several millenia.

Thanks to their actions, Snow Miser and his  twin are hailed as heroes and for the first time in centuries, are put on the Nice List. They go on to volunteer finishing Santa's journey, where the two end up handing each other gifts from the other and ending their long-time feud.

Snow Miser also appear with a slightly human appearance while still sing his theme song with minion who are females in this film, while he attack his brother two elf of Santa Jingle and Jangles decide to go to Sothern Town, while the two brothers see them and attack the sled with the two elves in it.

After it while he's in the ring fighting his brother, Santa Clause then come to the cave to confront the brothers telling them if they see his two missing elves, but both of them denied it until Santa call mother nature who force the two of them admit the truth they reluctantly said that they see them go to Southern Town, Santa now know what they doing decide to look for them and the match between the brother is back on.

After Santa finally found his elves and Reindeer has  Jingles and Jangles were exhausted after their journey and fall asleep in the sleigh, Santa Clause decide to visit Heat Miser to talk to him and Call Snow Miser, after Santa explain his plan both brothers refuse at first, but Santa said if they refuse to find a compromise he will call mother nature again, the two brother reluctantly agree to find a compromise and southern town found their belief in Santa Claus once again the snow came to their town much to Santa Claus joy. 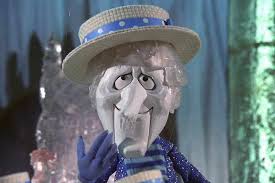 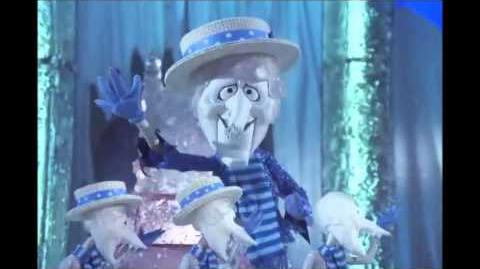 Retrieved from "https://hero.fandom.com/wiki/Snow_Miser?oldid=1897459"
Community content is available under CC-BY-SA unless otherwise noted.