Working at the castle, Baking pies and cakes

Marry the prince, escape her evil stepmother and live happily ever after with her true love (succeeded)

Snow White is the main protagonist of Disney's Snow White and the Seven Dwarfs. She is a princess and a sweet, gentle, kind-hearted and beautiful young girl. When her jealous stepmother, the Evil Queen sends the Huntsman to kill her, he tells her about her plan and Snow White runs away into the forest and befriends the Seven Dwarves. She is the first Disney Princess in the official lineup.

Snow White was the daughter of a Queen and after she died, Snow White's vain step-mother, the Evil Queen, took over the kingdom. Jealous of her step-daughter's beauty, she made Snow White a scullery maid and dressed her up in rags to conceal her beauty. But as Snow White grew older, she became more beautiful until one day, a Prince came by and noticed her and the two fell in love. Unknown to any of them, The Evil Queen was watching and grew jealous of them.

The Huntsman was ordered to take Snow White out into the forest and stab her to death and bring her heart in a wooden box, but he was unable to, and confessed to the young princess and told her to run away. Snow White complied and fled deep into the forest, and had a terrible hallucination, imagining the trees were trying to grab her, and she collapsed on the ground, sobbing. When she recovered, the forest animals approached her and she befriended them. The animals led her to the house of the Seven Dwarfs, and after she cleaned the house, she went to sleep on their bed.

It wasn't long before the Dwarfs returned after a hard day of working. Finding the house clean, they believed a monster was in their house and armed themselves, but instead found Snow White, still asleep. The Dwarfs allowed her to stay if she did the housework, but one Dwarf, Grumpy, was wary of her, as he didn't trust women. The Dwarfs quickly warmed up to her, even Grumpy, and they performed a song for her. After dancing and telling a story, Snow White slept in the Dwarfs room, while they found a different place to sleep. As she went to Sleep, Snow White blessed the dwarfs for their kindness.

Meanwhile, back in the castle, the Evil Queen had discovered that Snow White still lived, and decided to deal with her herself. Using a potion, she transformed herself into a hideous hag and took a poisoned apple that would put someone to sleep if they ate it. When the Queen had went to search for Snow White, the Dwarfs had left to work. While Snow White baked a pie for them, the Queen found her and peered at her through the window. After Snow White let her inside, the Queen offered her an apple. She bit it, and the spell worked, and Snow White collapsed, asleep.

As the Queen was about to leave, the Dwarfs attacked her and she fled up a cliff to escape, but lost her footing when lightning struck the cliff, and she plummeted to her death below, and a boulder crushed her, and two vultures flew down to feed on her. With the Queen dead, the Dwarfs returned to find Snow White apparently dead, and they wept. Placing her in a glass coffin, she remained there until the Prince from before came looking for her and kissed her, and she woke up from her sleep. The Dwarfs rejoiced that Snow White was alive, and celebrated as the Prince carried Snow White to his kingdom, where they were most likely married.

Snow White crying after getting scared in the forest

Snow White making friends with the cute forest animals after being scared in the forest. 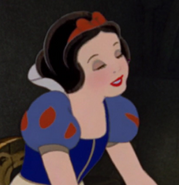 Snow White being given the poison apple by the Wicked Queen

Add a photo to this gallery
Retrieved from "https://hero.fandom.com/wiki/Snow_White_(Disney)?oldid=814508"
Community content is available under CC-BY-SA unless otherwise noted.