Snow White is the protagonist of the movie Mirror Mirror.

She was played by Lily Collins.

Snow is sweet, kind and caring and she believes in helping others, even when she is taught how to stand up for herself by the dwarves. She begins to realize that only she can bring them victory against the queen, and she defeats her and returns her father, plus gets married to Prince Alcott.

Snow White's mother died in child birth, and her father, the King, marries Clementianna, the most beautiful woman in the land and raises Snow White. One day, the king leaves to fight a great evil that has invaded the land but never returns. Queen Clementianna rules in his absence and keeps Snow White in the palace.

Ten years later, Snow White having turned eighteen, desires to see her kingdom. Defying Queen Clementianna's orders, she leaves the palace. Arriving at a forest, she meets Prince Andrew Alcott who has been robbed by thieving dwarfs. She and the Prince are drawn to each other but go their separate ways. Snow White arrives in the town, and finds the once-happy townfolk are destitute due to Queen Clementianna's greed.

Meanwhile, Prince Alcott finds his way to the palace. Queen Clementianna realizes he comes from a wealthy kingdom, and throws a ball to woo the Prince to solve her financial problems. Snow White secretly attends the ball, planning to ask the prince to help her restore the kingdom. Queen Clementianna notices them dancing and orders her manservant Brighton to take the princess into the forest and feed her to the Beast that lives there. Brighton takes Snow White to the forest, but he releases her and urges her to run. Snow White flees the Beast and collapses at the door to the Seven Dwarfs' house. She wakes up to find the dwarfs Grimm, Butcher, Wolf, Napoleon, Half Pint , Grub, and Chuck.

Queen Clementianna levies another tax among the starving people to pay for the parties she throws for Prince Alcott. Brighton collects the taxes, but, on the way back to the palace, the dwarfs rob Brighton and steal the money. Snow White sneaks away to return the money. The townspeople and the Town Magistrate are overjoyed to have their money back and Snow White lets the Dwarfs take credit for it, earning them the people's acceptance and gratitude.

Snow White and the Dwarfs crash the royal wedding and capture the Prince before Queen Clementianna and Brighton arrive. Back in the forest, the still-cursed Prince wishes to return to the Queen. Snow White kisses Alcott and the spell is broken.

Snow White encounters Queen Clementianna who reveals that she can control the Beast that has been plaguing the forest and sends it after Snow White. Prince Alcott tries to save Snow White, and after the struggle, the Beast captures the princess. However, the Beast hesitates in killing her and Snow White sees that it wears a necklace with a moon charm on it similar to the one the Queen wears. She cuts the chain with her father's dagger and the Beast suddenly becomes engulfed in light. Queen Clementianna begins to age, and the Mirror Queen says this is her consequence for using dark magic. The Beast turns out to be Snow White's father who has no memory of the last ten years.

Grateful to Alcott for his assistance, the king agrees to let him marry Snow White. During the wedding celebration, a crone in a hooded robe appears and offers Snow White an apple (which is poisoned) as a wedding gift. At first, Snow White accepts the gift, but as she is about to bite it, she realizes that the crone is Clementianna. Then Snow White pulls out her knife and cuts a piece from the apple and gives it to Clementianna, she says that sometimes you must admit that you've been defeated. Accepting defeat, Clementianna takes the apple as the Mirror House shatters upon the Mirror Queen while she declares that it was Snow White's story after all. Then everybody sees the queen drop to the floor and die before her body vanishes and Snow White celebrate her wedding by singing "I Belive In Love. 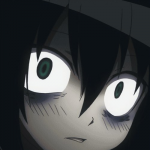