Rescue the Dwarf from danger (succeeded, but until they realized that he is ungrateful toward them)

Each other, their mother, The bear \ the prince, the prince's brother

NOTE: Do NOT be confused with Snow White from "Snow White and the Seven Dwarfs".

Snow White and Rose Red are two little girls living with their mother, a poor widow, in a small cottage. They are very good little girls; they love each other dearly; and their mother is very fond of them. Rose Red is outspoken and cheerful and loves to play outside. Snow White is quiet and shy and prefers doing housework and reading.

One winter night, there is a knock at the door. Rose Red opens the door to find a bear. At first, she is terrified, but the bear tells her not to be afraid. "I'm half frozen and I merely want to warm up a little at your place," he says. They let the bear in, and he lies down in front of the fire. Snow White and Rose Red beat the snow off the bear, and they quickly become quite friendly with him. They play with the bear and roll him around playfully. They let the bear spend the night in front of the fire; and, in the morning, he leaves, trotting out into the woods. The bear comes back every night for the rest of that winter, and the family grows used to him.

When summer comes, the bear tells them that he must go away for a while to guard his treasure from a wicked dwarf. During the summer, when the girls are walking through the forest, they find a dwarf whose beard is stuck in a tree. The girls rescue him by cutting his beard free, but the dwarf is ungrateful and yells at them for cutting his beautiful beard. The girls encounter the dwarf several times that summer, rescue him from some peril each time and the dwarf is ungrateful each time. Then one day, they meet the dwarf once again. This time, he is terrified because the bear is about to kill him. The dwarf pleads with the bear and begs it to eat the girls instead, but the bear pays no heed and kills the dwarf with one swipe of his paw. Instantly, the bear turns into a prince. The dwarf had previously put a spell on the prince by stealing his precious stones and turning him into a bear, but the curse is broken with the death of the dwarf. Snow White marries the prince and Rose Red marries the prince's brother.

Both Snow White and Rose Red are very good little girls. Snow White is quiet and shy, and she prefers doing housework and reading, while Rose Red is outspoken and cheerful and she loves to play outside. Both of them are capable of noticing the dwarf's ungratefulness after they rescued him several times and he was ungrateful to them each time they rescued him. 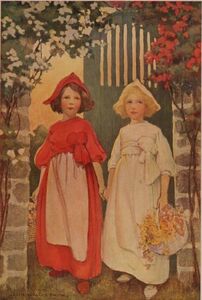 Snow White (right) and Rose Red (left) by Jessie Willcox Smith. This picture is from 1911 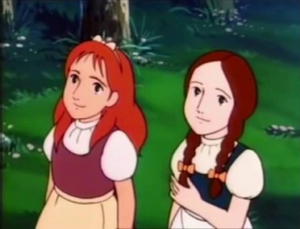 Retrieved from "https://hero.fandom.com/wiki/Snow_White_and_Rose_Red?oldid=1686890"
Community content is available under CC-BY-SA unless otherwise noted.