"A Traitor and a Criminal" by Napoleon

High intellect
Can read and write
Supreme strategy and tactics

Snowball is a major character in the novel Animal Farm written by George Orwell and its 1954 and 1999 film-adaptations. He is one of the pigs and a resident at Manor Farm, as well as the former leader of the farm.

Snowball was a resident at Manor farm, and like the other animals, loathed farmer Jones for mistreating them. Inspired by the dying words of another pig, named Old Major, Snowball led a uprising against Jones and chased him away from the farm. Hearing about the uproar, the humans soon came to the farm to reclaim it, but the animals used their cunning and element of surprise to chase them away. Snowball's leg was hit by a bullet, but he survived to take the role as leader among the animals. The farm was then renamed Animal Farm.

Snowball wished to carry on Old major's last wishes, and declared seven commandments which would shape the animal's new lifestyle. He and the other pigs, being the most intelligent creatures on the farm, also started to teach their fellow animals, such as Boxer how to read and write. By following Snowball's instructions, they were also able to finish the work of the farm much faster than Jones could ever had.

Snowball wanted to make living on the farm easier, and thus made blueprints for a windmill which would provide them with electricity. But another pig named Napoleon was jealous of Snowball's power. He ordered nine hunting-dogs which he had secretly been training to chase Snowball away from the farm, and then defended his actions by claiming that Snowball was trying to bring farmer Jones back. He then took the credit for Snowball's windmill-blueprints and assumed the role as leader of the animals. However, Napoleon proved to be a tyrant and ignored Snowball's commandments, killing any animal who opposed him.

Snowball was not seen for the remainder of the story. In the original novel, his rival Napoleon was never overthrown and kept on reigning supreme until he started to resemble a human himself.

In the 1954 movie however, Napoleon was eventually killed by the other animals because of his cruelty.

In the 1999 movie, the farm eventually fell apart due to Napoleons neglect and laziness, resulting in the freedom of the animals. It is implied that Napoleon himself died.

No matter the version, Snowball's dream of an animal utopia, sadly, was never realized.

Snowball was a ferocious fighter, and unlike Napoleon, was eager to personally defend the farm from humans if necessary. His mistreatment at the hands of farmer Jones made him resent all of his species and believed that the residents of Animal Farm should never negotiate with humans. To prevent them from becoming too similar to humans, he forbid them from drinking alcohol, sleeping in beds or wearing clothes.

Despite his aggressive nature, he was also a firm believer in the power of intelligence, thus why he tried to educate the other animals. And while he did forbid beds and clothes, he wanted his fellow animals to be comfortable, which is why he proposed the construction of the windmill. And unlike Napoleon, he never made any decisions without the support of his subjects. 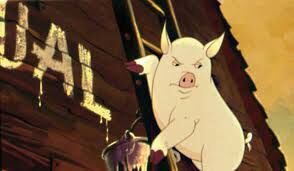 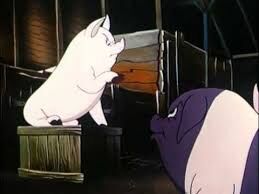 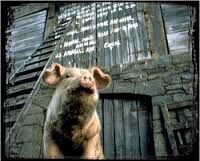 Retrieved from "https://hero.fandom.com/wiki/Snowball_(Animal_Farm)?oldid=2188729"
Community content is available under CC-BY-SA unless otherwise noted.