To get out from the Final Killing Game (failed)

Sohnosuke Izayoi (十六夜 惣之助 Izayoi Sōnosuke) is a character featured in Danganronpa 3: The End of Hope's Peak Academy and a participant in the Final Killing Game.

He is a member of Future Foundation and the leader of the 9th Division. His responsibility is to aid in the preparation, supply, management and distribution of weapons.

During his time at Hope's Peak Academy's Class 76th, Sohnosuke's title was Super High School Level Blacksmith (超高校級の「鍛冶屋」chō kōkō kyū no “kajiya”) until he was expelled after getting involved in a bombing incident.

Sohnosuke is a man in his early twenties, around 23 at youngest (about 18 in Danganronpa 3 - Side: Despair).

It's also stated there is a multitude of weapons hidden in his coat.

Being the former Ultimate Blacksmith, Sohnosuke is skilled at developing and using different weapons, and he stocks all kinds of hidden weapons inside his coat. Though usually meant for practical use, he can also make ones for collection purposes and he will forge basically any blade upon request.

Sohnosuke is stated to be a "silent type", who avoids talking to others, the only exception being his romantic partner Ruruka. He is incredibly loyal and very protective of her, drawing a hidden weapon from his coat on any person who gets close to her. Sohnosuke loves Ruruka's candy and Ruruka seems to feed him as a reward, him often resting his head on her lap. Though otherwise calm and serious, the way he eats candy and says "dewicious" is rather comical.

To protect Ruruka, Sohnosuke doesn't hold back and show his full splendor towards his enemy. Without any remorse, he set a trap that severely injured Seiko's right hand and took out all of his hidden weapons to fight her until she reached her demise.

Once Sohnosuke's trust is broken, it is very difficult to gain it back, as he believes "once a traitor, always a traitor". However, he doesn't mind when Ruruka betrays him or even when she takes his life, as he loves her very much and thus doesn't consider it a betrayal.

Even though he is described as a "cool" silent character and has a calm voice, in the official English dub he can sound notably angrier and more aggressive, and sometimes he uses language unlikely for the character (for example, "babe").

Sohnosuke in DR3 Side: Despair 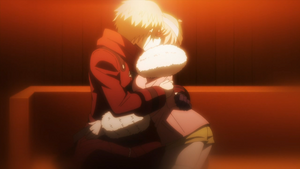