Head of the Japanese police.

Member of the Task Force.

He is voiced by Naoya Uchida in the Japanese version, and by Christopher Britton and Michael Lanning in the English version.

Soichiro Yagami is a tall middle-aged man with rectangular glasses. He has black hair and a moustache at the beginning of the show, but near the end, his hair and moustache begin to grey. He is usually seen in his brown suit.

Soichiro Yagami is a hardworking police officer who has a strong sense of justice. He will do anything he can to protect his family and the people of Tokyo. He is very defensive of them, constantly telling L that Light is not Kira, even when the evidence points to him. He has the respect of the entire task force, and is willing to do what is necessary to stop Kira.

Soichiro is the head of the Japanese police trying to find Kira. When L offers to help, he accepts, even though L makes some questionable moves. After the 12 FBI agents were killed by Kira, the police realised that Kira was killing innocents, and most of the police resigned. Only 6 agents remained, including Soichiro Yagami. The group was mad at L for not revealing his face, and alongside the agents, he goes to find out who L is. They address L as Ryuzaki and wear fake badges to protect themselves.

Later, L finds out that Raye Penber was most likely investigating Kira. The people who he investigated included Soichiro's household. Despite most of the task force objecting to setting cameras in Soichiro's house, Soichiro tells L to go ahead. L removed the cameras after people died when Light was working, but his suspicions for Light grew. Soichiro could not take it, and had a heart attack from all the stress. In the hospital, he talks to Light and L about the nature of Kira's killings.

When SakuraTV attempted to air the tapes sent by the 2nd Kira, Soichiro broke in with a truck and took back the tapes. He rejoins the task force using the alias Asahi. When Misa Amane is arrested and detained for being the 2nd Kira, Light tells the task force that he might be Kira, and should be detained until the killings continue. Soichiro was scared that his son might be Kira, so he asks to be detained until Light is released. When the killings continue (due to Light losing his memories and giving the Death Note to someone else), L tells Soichiro that to prove Light is not Kira, he is to take Light and Misa to a private area and threaten to shoot Light then himself. If Light kills Soichiro, than he is Kira. Soichiro fires, but the gun is full of blanks. L reveals the plan, but keeps Light and Misa under surveillance.

Light and Misa help the task force and L capture Kyosuke Higuchi, who reveals that he writes in the Death Note to kill people. The task force sees the fake 13-day rule, so Light is cleared, making Soichiro excited. However, L and Watari are killed by Rem shortly after, and Light takes his place as the new L.

His death impacts the team, especially Matsuda. This ends up being one of the reasons that Light is defeated. Light calls his dad a fool, and Matsuda shoots his him before he could use his watch out of rage for mocking Soichiro. 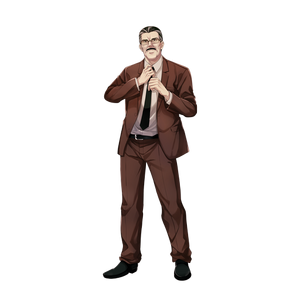