Solar Flare is one of the main protagonists from the 2016 mobile game Plants vs. Zombies Heroes. She is a Plant Hero of Sunflower, who leads Ka-bloom and Solar Classes.

After the malfunction of the Hero-Tron 3000, a Peashooter, a Sunflower, a Wall-nut and a Bonk Choy got hit and later became Green Shadow, Solar Flare, Wall-knight and Grass Knuckles respectively.

In her introduction comic strip, Crazy Dave asked Solar Flare to help him with the zombies surrounding them. She used her fire power to burn them. After they were defeated, Dave, Green Shadow, a Sun-shroom, and a Fume-shroom celebrated by having s'mores using her fire.

In Impfinity's Wild Ride, after Inpfinity caused mischief in the Sharkbite Shores Amusement Park, Green Shadow, Solar Flare, Wall-knight and Grass Knuckles tracked him down and managed to destroy his belt that creates the copies, erasing every clone along the way. Impfinity was captured but managed to escape on a rollercoaster carriage.

In Ice Zombie Cometh, she was chilling in a water park until Brain Freeze froze the entire park to make this place for his own. Solar Flare was frozen in an ice block until she managed to melt the ice with her power, sinking Brain Freeze in the water and regained the water park again.

In Attack of the tentacles!, Neptuna attacked Solar Flare, Grass Knuckles and Chompzilla while playing beach volleyball. She attacked them with Octo-Pets, but Solar Flare used her power to fry all of them. The heroes later used the volleyball net to capture her and the rest of the Octo-Pets.

In Dance-Off at the Disco, Electric Boogaloo entered the disco and attacked Green Shadow and Spudow with his power, but Solar Flare used her DJ skills to help them fight him back, and they eventually win a trophy and defeated the Zombie Hero.

In Zombopolis Apocalypse!, Solar Flare was upset when Super Brainz replaces the Mayor's Statue with himself. The Plant Heroes tried to attack him but failed to his cleverness, but until he was distracted by the mirrors, the heroes got their chances to attack him. Super Brainz was be seen in a reporter outfit when the heroes put the Mayor's statue backup.

In Battle for the Belt, Green Shadow, Solar Flare, Wall-knight and Grass Knuckles challenged the Smash in a wrestling contest. The Smash managed to defeat them by using his feet. However, Grass Knuckles tossed Wall-knight at him, which easily defeated him and won the belt.

In KO at the OK Arcade, Solar Flare was seen playing an arcade game when Super Brainz and Impfinity infiltrated the arcade. They had a match on the arcade game and the Zombie Heroes won.

Solar Flare appeared in Immorticia's introduction comic strip, alongside Green Shadow and Grass Knuckles chasing her, until she unleashed her spell to summon Zom-Bats.

She also appeared in Z-Mech's introduction comic strip, as Spudow, Chompzilla, Green Shadow and her chasing an Imp, until he managed to escape from them and used his battle suit to fight them.

In Neptuna's comic strip, she alongside Green Shadow, Crazy Dave and some plants playing at the beach. When Dave insulted her, she dropped a giant Octo-Pet on him and the plants ran from her.

Solar Flare's ability is similar to that of Fire Flower, as she can perform flaming attack to zombies, but she can spread her flames in a radius. She is also skilled with video games and music. 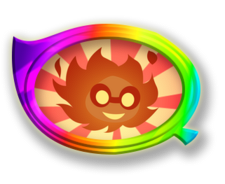 Sun burn
Add a photo to this gallery

Retrieved from "https://hero.fandom.com/wiki/Solar_Flare?oldid=2139987"
Community content is available under CC-BY-SA unless otherwise noted.