American Boot (By Himself)

Killing his enemies
Representing the American ways through his weapons

Represent America in his own way
Defeat the enemy team

The Soldier is a crazed patriot from America's heartland in Team Fortress 2. Tough, durable and well-armed, he's versatile, capable on both offense and defence, and a great starter class to get familiar with the game. Being xenophobic and jingoistic, he carries an extreme hatred of foreigners (especially French and Scottish people) and hippies.

The Soldier is well known for his spectacular rocket jump. In defiance of all good sense and judgment, the Soldier can detonate a rocket at his feet and launch himself skyward at the cost of some health. This ability allows the Soldier to pop up in unexpected places and reach areas off-limits even to the Scout's double jump. The Soldier is slower than most classes, but in turn is more durable, having the second highest amount of health by default (after the Heavy).

The Soldier's Rocket Launcher is surprisingly underpowered in terms of damage, with even a direct hit by a rocket generally not being able to kill the stronger classes (in most games, a direct hit or even splash damage from a rocket is generally a one-hit kill). The Rocket Launcher however keeps its notable trait of dealing splash damage, although the damage is generally less than that of a direct hit. A variation of the rocket, known as the Direst Hit, is able to deal more damage than the default Rocket Launcher as well as mini-crits airborne enemies, but has a much smaller blast radius, encouraging him to concentrate on direct hits rather than indirect ones. All rocket launchers will gib enemies if they are killed by a direct rocket, often accompanied by the Soldier shouting his catchphrase "MAGGOTS".

Like most of the mercenaries, the Soldier carries a shotgun for his secondary weapon, which is great for close combat when the rocket launcher is too risky to use. He can also substitute it for a backpack called the Buff Banner, which will build rage as the Soldier deals damage to enemy mercenaries, and when fully charged, will allow the Soldier to literally blow his own horn and buff himself and nearby teammates with temporary guaranteed mini-crits.

The Soldier uses a shovel for his melee weapon of choice, which deals average damage, but he can also use a variation known as the Market Gardener which allows him to deal guaranteed crits while airborne, but at the cost of swinging slower than the default shovel. The Soldier can also use one of two pickaxes as a substitute for his shovels. The first pickaxe is called the Equalizer which deals below average damage at full health, but deals more damage as the Soldier gradually take damage, and when at death's door, deals extraordinary damage. The second pickaxe is called the Escape Plan, and allows the Soldier to run faster as he takes more damage, allowing him to run faster than even the Scout when he is nearly dead; on the downside however, it marks him for death (instant mini-crits) while wielding it. In addition to their health-related effects, both pickaxes also enable the Soldier to preform his signature taunt kill called the "Kamikaze", where the Soldier can destroy all enemies and Engineer buildings within a 6-foot radius with one of his own grenades, but at the ultimate cost of sacrificing his own life, as the name of the taunt suggests.

Like the other characters, the Soldier is an anti-hero/anti-villain depending on whose side you're playing for. 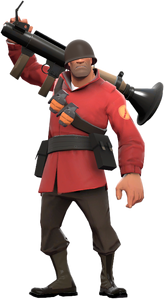 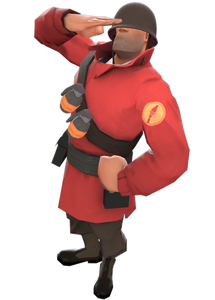 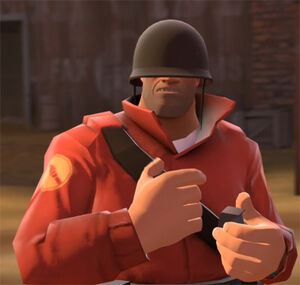 "Then he used his fight money to buy two of every animal on earth, and then he herded them onto a boat, and then he beat the crap out of every single one!"

The Soldier with the other mercenaries. 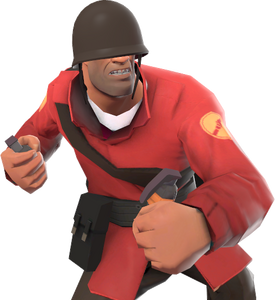 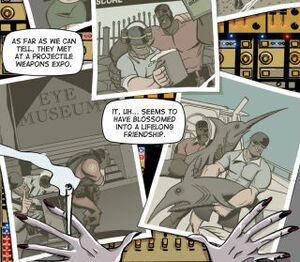 The BLU Soldier and RED Demoman’s time as friends during the WAR comics.
Add a photo to this gallery 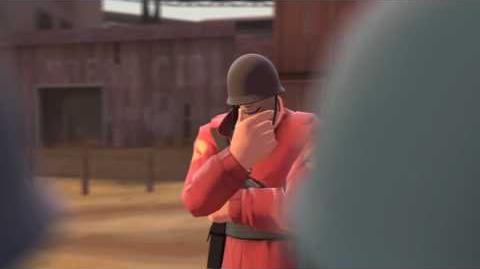 Meet the Soldier
Add a photo to this gallery

Soilder on the Villains Wiki

Retrieved from "https://hero.fandom.com/wiki/Soldier_(Team_Fortress_2)?oldid=1634065"
Community content is available under CC-BY-SA unless otherwise noted.