The Sole Survivor is the protagonist and the playable character of the 2015 video-game Fallout 4. Depending on the player's choice of gender, the Sole Survivor can either be the husband or the wife in a pre-War family, and has a son named Shaun.

They were voiced by Brian Delaney and Courtney Taylor.

The default name of the male Sole Survivor is Nate, who's a retired army veteran, while the female's name is Nora, who's a graduate from law school.

On October 23, 2077, Nate was preparing for an event at the Veteran's Hall when a Vault-Tec representative approached the family and approved them for the papers that allowed them access into Vault 111. Only a few minutes later, it was announced by a newsreader that nuclear detonations were being reported, forcing the Survivor and their family to rush to Vault 111. They were then trapped in cryogenic stasis under the pretense of being "decontaminated."

In 2227, 150 years later, the Sole Survivor and their spouse are reawakened by two unknown individuals (one of them being Kellogg), and a thrid one off-screen. They open the spouse's cryogenic tube with the intent of kidnapping Shaun. Though conscious, the Sole Survivor is trapped in their tube and is powerless to do anything but watch their spouse being shot and their infant child abducted.

The Sole Survivor is re-frozen, awakening 60 years later in 2287 and escaping the cryogenic tube. Realizing that they are the sole survivor of Vault 111, the Sole Survivor emerges from the Vault and vows to avenge their spouse's death and locate Shaun.

The Sole Survivor heads home to Sanctuary Hills, now ruined from the bomb blast, where they meet a distraught Codsworth, revealing to the Survivor that 210 years had passed since they were frozen in the vault, also telling the player character to go to Concord for help.

In Concord, the Sole Survivor then meets Preston Garvey - one of the last of the Commonwealth Minutemen - and assists him in protecting settlers from a group of raiders and a deathclaw, later helping them to travel to, and settle into the remains of, Sanctuary Hills.

The search for answers

After finding Valentine, they learn the identity and location of their spouse's killer, a man named Conrad Kellogg. Tracking him down, Kellogg reveals that Shaun is in The Institute, a secretive organization feared by the people of the Commonwealth, that is based below the ruins of the Commonwealth Institute of Technology. The player character then kills Kellogg and retrieves a cybernetic implant from his brain.

Just a few minutes after escaping Kellogg's fort, the Sole Survivor also witnesses the arrival of the Brotherhood of Steel in an airship called The Prydwen, their mobile airship HQ.

After some consultation with Nick and Piper, they head to Goodneighbor, where they first encounter John Hancock, the self-appointed ghoul mayor of the town, and get help from Doctor Amari, a scientist skilled in neuroscience. The doctor assists the Sole Survivor in viewing the dead mercenary's memories and discovering that the Institute uses teleportation as the means of travel between their facility and the surface.

After viewing Kellogg's memories, the player character is then tasked to go to the Glowing Sea - the ground zero of the nuclear blast during the intro sequence - to find Brian Virgil, an ex-Institute scientist who specialized in researching the Forced Evolutionary Virus, who has escaped and gone into hiding, to get help in infiltrating the shadowy organization.

Virgil, now mutated into a super mutant by prolonged FEV exposure, mentions that the player must kill an Institute Courser - one of the most advanced creations of the Institute, designed to be stronger, faster, and smarter than average human beings - to get a special chip from it in order to access the Institute.

Once the chip is retrieved, the player character is directed to find The Railroad, a secret organization that works to free synths from the Institute's control and give them normal lives in the Commonwealth, since only one of its members, Tinker Tom, can decode the chip and get the frequency code used by the Institute to teleport.

The player character then heads back to Virgil, who gives them a blueprint of a device that hijacks the frequency of the Institute's Molecular Relay. After retrieving the blueprints, the Survivor must seek assistance from one of the three factions: the Minutemen, Railroad, or the Brotherhood.

Once the device is built, the player character infiltrates the Institute to find their son. After finding a synth based on a young Shaun, it is revealed that the real Shaun was kidnapped in 2227, sixty years prior to the Survivor's release from cryogenic sleep, and is now an old man who goes by "Father", as well as the current Director of the Institute.

The fate of humanity

From now on, the Survivor faces a choice that will significantly affect the Commonwealth and its people. They can work against Shaun by assisting one of the factions; the Railroad in destroying the Institute and liberating synths, the Brotherhood of Steel in order to exterminate all synths along with the Institute, or the Minutemen in destroying the Institute (and the Brotherhood of Steel if made hostile to the player character) in order to protect the Commonwealth.

Alternatively, they can side with Shaun and help the Institute in securing the Commonwealth by destroying the Railroad and the Brotherhood of Steel (The Minutemen can be persuaded to ally with the Institute after passing a few difficult speech checks). Any of the four choices results in Shaun's death, this being due to either the cancer he'd developed by then, or by the Survivor's hand.

At the very end, the synth child Shaun will refer to the Sole Survivor as its parent and asks them if he can go live with them anywhere in the Commonwealth to be a family. If the Survivor agrees, the synth child then gives the player character a holotape from the real Shaun with a message that differs depending if the player character sides with the Institute or not.

In the holotape, the real Shaun tells his parent that he wishes they would give the synth child a chance to live as a family since Shaun himself never had the chance to with the Sole Survivor.

The Sole Survivor then contemplates on the events that transpired and says that "This isn't the world I wanted, but it's the one I found myself in", and that they are now ready for anything comes ahead because they know that "War. War never changes." 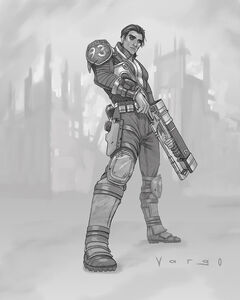 Retrieved from "https://hero.fandom.com/wiki/Sole_Survivor?oldid=2233106"
Community content is available under CC-BY-SA unless otherwise noted.