Crush Xevious Army and GAMP to protect Earth from being conquered.

Solvalou is a given name of the protagonist ship that appears in every installment of Xevious shoot 'em up series, fighting off the Xevian army in a battle for Earth's survival.

Solvalou was discovered about 4000 years after the Earth's last ice age when it was unearthed from great eruptions that occurred. After it's discovery, a pilot named Mu and his android assistant, Eve, were sent on a mission to Xevious in order to establish contact with other humans. Upon arriving at Xevious, they discovered that GAMP had taken over Xevious and was eventually captured. While in captivity, they met and escaped with a sympathizer named Mio. Eventually, they left Xevious and headed back to Earth to warn them of GAMP invasion. Several thousand years later, GAMP began their plan to capture the Earth. Around this time, the Solvalou warped in from hyper-space ready to fight GAMP forces. Using the information they gathered while on Xevious, they modified the Solvalou and began their campaign to fight off GAMP.

First of all, Solvalou is armed with two weapons that are used to attack all terrain. The air weapon is the Zapper and the ground weapon is the Blaster which has a scope for accurate bombing. Later, it was upgraded to use different weapons in addition to the two main ones. The first is a powerful Laser for air targets but uses the blaster for ground targets. The next weapon is a seeking energy ribbon that can hit ground and/or air targets, however the weapon is not too powerful. Other ships were created based on the Solvalou's design. They all improve upon the zapper and blaster in some way. 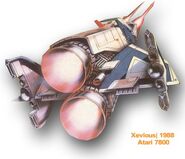 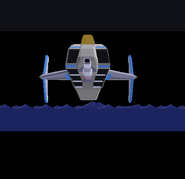 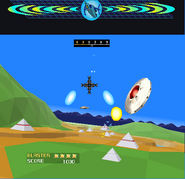 Solvalou's Crosshair
Add a photo to this gallery
Retrieved from "https://hero.fandom.com/wiki/Solvalou?oldid=1568471"
Community content is available under CC-BY-SA unless otherwise noted.