God Eater, Member of the 1st Unit of the Fenrir Far East Branch

Soma Schicksal is one of the main protagonists and party members of the video game God Eater. He is a member of the 1st unit of the Far East Branch of Fenrir, led by his best friend and long-time comrade Lindow Amamiya. He has a bad reputation of losing comrades whenever they are on a mission with him, which leads many to believe he's cursed. He is also the son of Johannes von Schicksal.

A God Eater veteran at the age of only 18. Being so taciturn, he hates interacting with others. He is believed to have a much larger strength capacity than the other team members. Son of Johannes and Aisha Gauche.
It is revealed in the game that he is one of the first God Eaters, if not the first. This is due to his status as a test subject for the P73 version of Bias Factor, administered before he was born. This gives him semi-unstable abilities not seen within other Gods Eaters, such as an incredibly high God Arc compatibility rate. He shares a bond with Shio, as he considers himself as a monster, which gives him a counterpart in Shio, one of the few things he feels he has something in common with. After he devours her his God Arc turned white because of the special bond they had.

Soma is now a member of Cradle and also conducts research on Aragami like his father before him. The Kyuubi is one of his main interests at the time that he, the remainder of Cradle sans the protagonist of the first game, and the remaining members of Blood meet up, due to its Retro Oracle Cells.

Being so taciturn, Soma dislikes interacting with others. He is believed to have a much larger strength capacity than the other team members. He shares a bond with Shio, as he considers himself as a monster, which gives him a counterpart in Shio, one of the few things he feels he has something in common with.

He eventually grows out of disliking being around others after Shio takes Nova to the moon, though shades of his old self show through from time to time out of annoyance at the things his peers say. In God Eater 2, he even smiles a bit more often in his Character Episode.

Soma makes an appearance in Project X Zone. He is a playable character with his partner Alisa Ilinichina Amiella.

A new type of God Eater from Russia, her full name is Alisa Ilinichina Amiella. Due to the rarity of her status a new type and her excellent training results, she has a strong awareness of being an elite, and initially looked down on her allies. Due to the trauma of losing her parents to Aragami at a young age, her actions caused Lindow to become MIA during a mission, eventually resulting in her mental breakdown. However, with the support of her allies, she managed to recover. Having opened up to those around her, she cooperated far more effectively with the unit. She also participated in the search for Lindow, ultimately rescuing him alive. She is serious and studious, with a dislike for cooking. 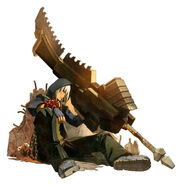 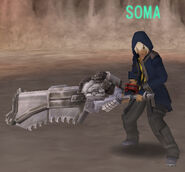 Add a photo to this gallery
Retrieved from "https://hero.fandom.com/wiki/Soma_Schicksal?oldid=1665172"
Community content is available under CC-BY-SA unless otherwise noted.