Heroes Wiki
Register
Don't have an account?
Sign In
Advertisement
in: Marvel Heroes, Lawful Good, On & Off,
and 16 more

Songbird (real name Melissa Joan Gold), formerly known as Screaming Mimi is a fictional character, a former member of the Thunderbolts and a villain turned heroine in the Marvel Universe. Originally a female wrester, Melissa would gain the ability to use her voice as a sonic scream. She became a criminal and worked alongside Angar the Screamer, but later reformed after stopping Baron Zemo when she was a member of the Thunderbolts.

She was created by Mark Gruenwald, Ralph Macchio, John Byrne, and first appeared in Marvel Two-In-One #54 in August of 1979.

She grew up in a trailer park with her drunken father, her mother in prison for theft, and was tormented constantly by her peers. She had to develop a tough personality and ended up living on the street after running away from home. After being set up and sent to prison herself, she joined the super-human wrestling scene, being forcibly given surgical implants to give her super-sonic screams. After a brief stint with the Masters of Evil, she partnered up with fellow sound-themed villain Angar.

After the death of Angar, Mel feel into despair and ended up destroying her vocal cords. Approached by Zemo and Fixer, she was given a new set of cybernetic vocal cords which not only returned her screams to her, but allowed her to manipulate sound into hard objects. Becoming the "hero" Songbird, she agreed to help them in their plans. Seeing her Songbird persona as the second chance she so desperately needed, she recreated herself fully, embracing the new mantle she had been given and, as more former villains joined the team, sought to give them the same chance that she had been given at a new life.

Melissa Joan Gold is the daughter of Mimi Schwartz Gold and an unnamed father, and her parents caused most of her troubled childhood. Her father was an abusive alcoholic and her mother was imprisoned, leaving Melissa to drop out of high school and become a runaway.

Becoming rough edged, Melissa joined the Grapplers, a wrestling team where she took on the name, "Screaming Mimi" and was given a costume by the Tailor. The female members of the Grapplers were rejected by the wrestling federation when it came to pay, and the group decided to work at cover operation for the Roxxon Oil Company. The Grapplers were stopped by Quasar, and were arrested for their misdeeds. The group were sentenced to Ryker's Island, where Melissa used her sonic scream when the Grapplers fought Dazzler.

The group were paroled and continued to perform crimes since the women's wrestling foundation lost momentum, and later visited the Thing while he was in the hospital. The Grapplers would return to the wrestling world when led by Auntie Freeze in the Unlimited Class Wrestling Federation, but it was dissolved when two members were killed by Scourge. After the dissolution of the group, Melissa was contacted by Baron Zemo to join the Masters of Evil to help him free Yellowjacket from prison. During the course of her assignment, she was stopped by the Wasp and Paladin. She would escape from the heroes and became the partner and lover of Angar the Screamer, and battled Hawkeye and Mockingbird. Melissa joined the Femizons to help them conquer the Earth, but their plans were stopped by Captain America.

She continued to commit crimes with Angar, but he died in her arms during one heist, causing Melissa grief. After his death, Melissa was contacted once again by Zemo, and had her vocal cords augmented by the Fixer. She then decided to leave her alias "Screaming Mimi" and took on the title of "Songbird", and joined the Thunderbolts. The group was used by Zemo to pretend to be heroes, but Melissa and her teammates started to enjoy their good deeds. Melissa started to enjoy being a hero, and began romantic relationship with her teammate, Abner Jenkins, and turned against Zemo. 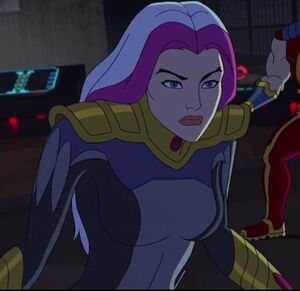 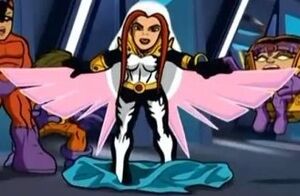 Songbird in The Super Hero Squad. 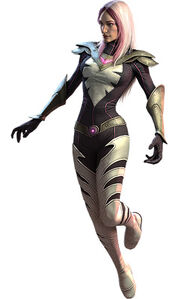 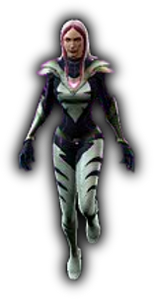