Writing song.
Being with Geo.
Deleting viruses.
Protecting and saving people.
Hanging out with Geo, Luna, Bud and Zack.

Help Geo to stop the FM-ians from destroying Earth. (succeeded)

Sonia Strumm, known as Misora Hibiki (響ミソラ Hibiki Misora) in Japan and as Sonia Sky in the English anime dub, is the deuteragonist of the Mega Man Star Force series. Sonia is assumed to be around 11–12 years old.

She is voiced by Misato Fukuen in the Japanese version in the anime, and by Wendee Lee in the English version of the anime.

Introduced in the first game, Sonia became a singer in order to make her mother happy, but after her mother died, her manager began using her success for his own financial gain. Her depression is what called Lyra to her, and after being defeated they both become allies. Like Geo, Sonia can't have her mind controlled by Lyra and so relies in her own fighting strength during battles. Together they become Harp Note. She is the first person Geo forms a brotherband with.

In the games, Sonia was a pop singer until she met Geo Stelar, when she rebelled against her manager and retired (temporarily). In the anime, however, she just wants to sing songs that she wrote herself instead of those written for her. In the midst of these two events, she encounters Lyra. She has a crush on Geo, but like most other females in the games, has not outright admitted it, but strongly pushes it to the audience, this can proven a several times in the Star Force game series.

Sonia is capable of the following abilities and attacks, some of which are restricted to the anime or games exclusively: 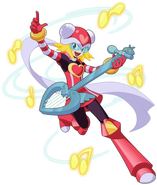 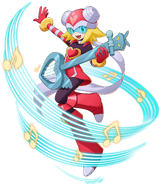