Sonic Boom is a griffin in Skylanders: Spyro's Adventure.

She is voiced by Lani Minella who also voiced Rouge the Bat from Sonic the Hedgehog.

Long ago, Sonic Boom took refuge high atop a mountain peak in the far reaches of Skylands, hoping to keep her griffin hatchlings safe. But despite her precautions, a devious wizard tracked her down and placed a wicked curse on the griffin eggs. Once hatched, the young hatchlings can live for only mere moments before they magically return to their shells... only to be hatched again in an endless cycle. Wanting to prevent such evil from happening to others, Sonic Boom joined the Skylanders and has trained her young to defend Skylands each time they are hatched. 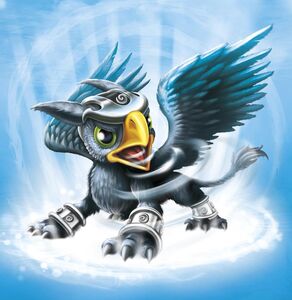 Series 2 Sonic Boom.
Add a photo to this gallery

Retrieved from "https://hero.fandom.com/wiki/Sonic_Boom?oldid=1925352"
Community content is available under CC-BY-SA unless otherwise noted.