Member of The Resistance (formerly)

Get rid of the Metal Virus and cure those infected with it (succeeded).

Sonic the Hedgehog is the titular main protagonist of the IDW Sonic the Hedgehog comics. He is a blue anthropomorphic hedgehog who possesses the power of super speed. He uses this ability to defend his world from the forces of evil, most notably against the tyranny of evil scientist and longtime nemesis, Dr. Ivo "Eggman" Robotnik. He and the doctor have fought for some time, with Sonic always thwarting every world-conquering scheme the omelet dictator has put forward.

Sonic is a tall and thin hedgehog with blue fur and patches of peach-colored skin or fur on his face, arms, and belly. He has six long spines on the back of his head and two more on his back behind his shoulders. His eyes are green. His usual attire consists of white gloves, and his iconic pair of red sneakers with white cuffs around the ankles and white straps across the top, the latter held down by a golden buckle on each foot.

Always prepared to put his life on the line to protect others, be they friends or civilians, Sonic is a carefree spirit and a daredevil at heart with a strong sense of justice, who, unlike most, finds fun in fighting and thwarting evil, primarily in the form of Dr. Eggman and his empire. Despite his usual egotistical and sometimes lazy demeanor, Sonic's defining traits have always been his pure heart of gold and his utter dauntlessness in the face of danger.

Owning to his free-spirited way of life, Sonic values freedom above all else and strives to live his life according to his own rules rather than the standards of those around him or for the sake of heroism and duty. As such, despite his loyalty to his friends and allies, Sonic is typically unwilling to commit to anything that requires him to act primarily under the authority of others, including his friends, believing that he knows what is best for himself.

Despite this, Sonic's compassion has been brought into question. After Eggman created a worldwide infection from something called the Metal Virus, he has been reminded multiple times that he was an indirect factor since he allowed Eggman (who was the kind Mr. Tinkerer at the time) to stay in Windmill village and allowed Metal Sonic to be free after defeating him; Only for the latter to immediately go to the former and bring him back to his old ways. After being infected himself and continuously having to run to hold it back, this caused Sonic to become sympathetic and depressed, yet still optimistic. It's gotten to the point where he seems to have PTSD, as shown when he remembers how everyone chastised him for his decision on letting Eggman off easy when Zavok promised to make him suffer. Nonetheless, Sonic always chooses to stick by his principles no matter what.

Sonic had been battling Dr. Eggman for some time. Their earliest known conflict included a battle between Sonic and Eggman who was in his Egg Viper mech, resulting in Sonic's victory.

Another encounter involved the Space Colony ARK, in which Eggman used its Eclipse Cannon to blow up a part of the moon in order to show the world the power that he wielded. These events lead to Sonic teaming up with Miles "Tails" Prower, Knuckles the Echidna, Rouge the Bat, Shadow the Hedgehog, and even Dr. Eggman himself to save the world.

Sonic's trademark ability is his super speed. He can travel up to speeds surpassing Mach 1, which is at the blistering speed of about 768 mph, and he utilizes this in hand-to-hand combat, giving him quick reflexes. He is also very agile, being capable of performing extreme acrobatic feats. He also has incredible jumping skills: he can set off with enough power to bend thick metal armor and go hundreds of meters into the air with a single jump. While his top speed is unknown, glimpses of Sonic's prowess are shown in his tendency to routinely scale vertical walls, effortlessly knock down enemies in his path, run over water, and plow straight through foes. Sonic can also use the Boost to not only increase his speed but also barge through obstacles in his path.

Sonic has demonstrated complete mastery of his speed at any level. Not only can he run at a maximum tilt in straight lines, but also through sharp turns with full control over his momentum, and without recklessly crashing into unintended targets. As far as stamina goes, Sonic's is seemingly limitless as he is never winded from running. 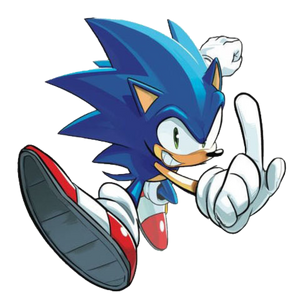 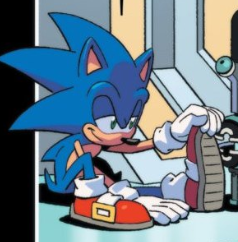 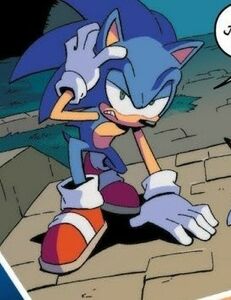 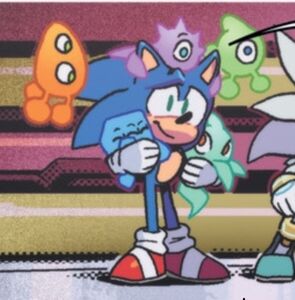 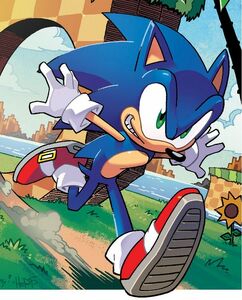