To get rid of himself so he can be back to his normal self (succeeded; Indirectly)

Sonic the Werehog is a werewolf-like form of Sonic the Hedgehog and a protagonist who appeared in the videogame Sonic Unleashed. He was actually Sonic who, after accidentally trapped by Dr. Eggman and turned into a Werehog, Sonic must find the 7 Chaos Emeralds to restore Mobius and turned back into his normal form, he must stop Dark Gaia from destroying Mobius and he is helped by Chip.

As Sonic was turned back to his normal self, Dark Gaia becomes Perfect Gaia, Sonic turns into Super Sonic in time to kill Perfect Gaia and seals him for good.

Sonic later wakes up in the morning and finds up that Dark Gaia was sealed forever and has never returned from the dead again.

Sonic personality almost remains the same. He does have a noticeable short-temper, and tends to get annoyed by Chip's antics. He displays aggression in battle against enemies, and bosses.

Because of its appearance, Sonic makes sure to avoid being spotted in his Werehog form (however in-game, the citizens don't act afraid when Sonic speaks to any of them). When Amy didn't recognize him in his Werehog form, he becomes sad and walked away.

Unlike everyone else under Dark Gaia's corrupting influence, Sonic is able to resist, due to his indomitable will.

Unlike Sonic's regular form, the Werehog form doesn't have his trademark speed and is forced to make use of his super strength to combat enemies. 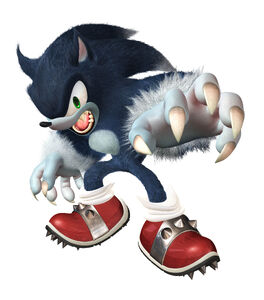 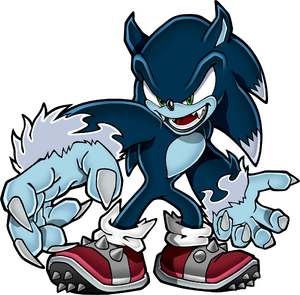 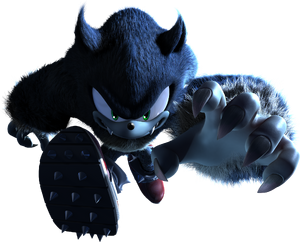 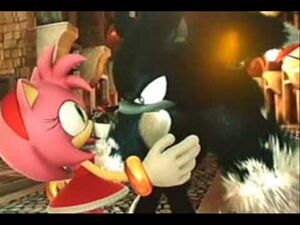 Sonic the Werehog smilling before taking a picture,

The roaring of Sonic the Werehog,

Retrieved from "https://hero.fandom.com/wiki/Sonic_the_Werehog?oldid=1692736"
Community content is available under CC-BY-SA unless otherwise noted.