Leader of the Regulators

Sonora Cruz is a side-character in Fallout 3. She was voiced by Shari Elliker.

Sonora was born in 2242. As of 2277, she is the leader of the Regulators. She can be found at the Capital Wasteland's Regulator HQ, usually standing in a dark corner of the single upstairs room. As leader of the hidden organization known as the Regulators (who are recognized by their long dusters), Sonora is a woman with a mission: to rid the wasteland of troublemakers and ne'er-do-wells. Her unknown benefactors, who set up this clandestine operation around a decade ago, are willing to pay for scalps, or in the Regulators' case, fingers.

When the Lone Wanderer obtains the Lawbringer perk, they can earn Karma and caps by completing bounties, and bringing fingers to her from evil human or ghoul characters they have killed. If the Lone Wanderer's Karma is "Very Good", they will get a bonus from her. Sonora will pay a special bounty reward of 1000 caps for Junders Plunkett's finger. 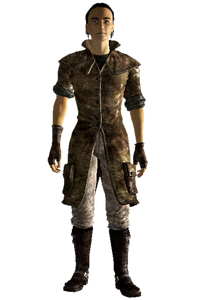 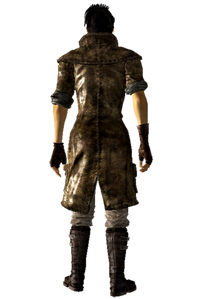