To be with King Julien

Anthropomorphic
Sonya is a female grizzly bear with brown eyes and supporting character in Madagascar 3: Europe's Most Wanted. Sonya wears a pink tutu, has a bow in her hair, and rides on a tricycle. During the film, she breaks her tricycle which is replaced by a Ducati motorcycle. Soon she starts a relationship with King Julien, who is smitten with her. She enjoys riding her bike and becomes upset if it is ruined. But Julien cheers her up by buying her a motorcycle in its place (by bribing the shopkeeper with a stolen Pope's ring). 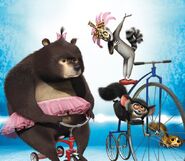 Sonya and the animals getting ready to do their acts.