Heroes Wiki
Register
Don't have an account?
Sign In
Advertisement
in: Mature, The Walking Dead Heroes, Deceased,
and 14 more

Survive the zombie apocalypse (failed in the TV series)

Sophia Peletier is a survivor of the zombie apocalypse in AMC's The Walking Dead. She served as a minor protagonist during Season 1 and the beginning of Season 2. She is the daughter of Ed and Carol. During the initial outbreak, Carol, Ed and Sophia evacuated to Atlanta for safety, but end up joining a camp of survivors. While at the camp, Sophia sparked up a friendship with Carl Grimes and Eliza Morales.

Before the outbreak, Sophia used to wake up at 3:00 a.m. crying when she was a baby. Her father got annoyed by it, and stayed with a friend until she calmed down, indicating that he did not care much for her. It is possible she was a victim of abuse from her father, since he was abusive towards her mother. Carol also hints at potential other abuses while she is praying in the church, claiming Ed "looked at her with whatever sickness was inside of him". During the outbreak, she meets Shane, Lori, and Carl as evacuations are being made for survivors to head towards Atlanta. With the city being destroyed by the military, she, along with her family, decide to stay with Shane, Lori, and Carl.

After Sophia leaves the group behind on the highway, she finds places to hide and to sleep. She is, however, soon attacked and bitten on the neck by a walker. She eventually dies and reanimates. She is later found by Otis and taken back to Hershel's farm where she is put into the barn. After Shane forces open the barn, the walkers exit and are gunned down by the group. Once all of the walkers have been put down, Sophia slowly walks out and is shot in the head by Rick. 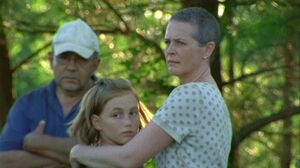 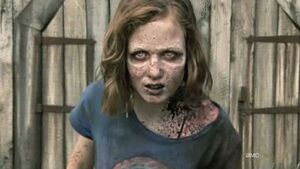 Sophia Peletier is a main character first encountered in Issue 2 of Image Comics' The Walking Dead and is one of the few remaining survivors of the original Atlanta band. Sophia is a young blonde girl who survived with her mother, Carol; she is now the only surviving member of her family. Later after her mother's death, she was adopted by Glenn and Maggie.

Sophia at the Walking Dead wiki