Sophie is the young heroine from The BFG and the films of the same name.

She is played by newcomer Ruby Barnhill in the 2016 live-action film.

Sophie is a 10-year-old orphan girl who lives in a dingy orphanage run by the unfriendly Mrs. Clonkers. One night, she is stolen away by a giant, The BFG, who is willing to protect her from the wicked giants of Giant Country.

The BFG, or Big Friendly Giant, keeps Sophie safe from the giants and shows her his wonders, like whizzpopper drinks and the horn he uses to deliver positive dreams to children.

When they hear that the evil giants, led by the bloodthirsty Fleshlumpeater, are heading to England to devour children, it is up to the two of them to stop them, aided by the Queen of the United Kingdom. 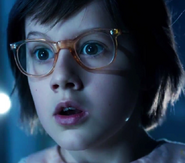 Retrieved from "https://hero.fandom.com/wiki/Sophie_(The_BFG)?oldid=1790207"
Community content is available under CC-BY-SA unless otherwise noted.