Witch of the East

Break the spell cast on her by the Witch of the Waste (succeeds).

Locate and restores Howl's heart to him (succeeds).

Witch of the Waste (formerly)

Nurturer
Sophie Pendragon (née Hatter) is the main protagonist of the 2004 Hayao Miyazaki's film, Howl's Moving Castle. She is a young hatter who, at one point, is cursed by the Witch of the Waste to age rapidly to her 90's. She is shown to have hated turnips. She is also friends with the title character Master Howl and his apprentice Markl.

In the English dub, Sophie is voiced by Emily Mortimer as a young woman, and by the late Jean Simmons as an old woman.

At the beginning of the film, Sophie, her sisters, and her mother are all working in a hat shop as a train rolls by. Hearing the excitement over the great wizard Howl, Sophie's sisters chatter on about how Howl has the capability of eating one's heart. After a debate and in a hurry, Sophie has leaves to go visit her younger sister, Lettie. However, Sophie is walking down an alley when two guards stop to flirt with her. Happy and fun, but, a bit timid, Sophie politely declines their flirting when Howl appears. Then he took Sophie away and told her that he was being followed. Due to Labor Day, they quickly flew to the store and parade. Then Sophie told her sister that Howl saved her, but did not realize that it was actually Howl. Returning home that night, Sophie then closes up the shop as the Witch of the Waste appears and turns Sophie into a ninety-year old woman when she refuses service to the Witch of the Waste. A condition of the spell is that she can't tell anyone about it, further complicating her situation.

Wanting to find a cure, Sophie makes her way to the Wastes and finds a scarecrow who she then names Turnip Head because his head is a turnip. Finding Howl's gigantic castle, Sophie is allowed in by Howl's fire demon, Calcifer, and meets his apprentice, Markl. Pretty soon, Howl appears and Sophie is hired as their new cleaning woman. Meanwhile, their country and the neighboring country is at war with each other. Sophie causes Howl to have a breakdown because she had accidentally causes him to change his hair color to an orange-pink hue. However, he tries to summon demonic forces, but Sophie can saves him. Markl quietly mentions to Sophie Howl has done this before when one of his girlfriends broke up with him.

Madam Sullivan (Howl's mentor) requests his appearance and finds out Sophie's true demeanor and feelings towards him. She is also warns Howl that if he refuses to participate in the war, his powers will be taken away. To prove this, Sophie is showed the Witch of the Waste, who is now a powerless old hag. Sophie quickly falls in love with Howl and wishes to help him, but learns that he transforms into a bird-like creature to interfere with each side of the war. Every transformation is not only making him weaker, but is making it harder for him to become human again. Bombs and war soldiers soon get a follow on Howl's lead. He creates a bigger house for their growing family. One day later, the war is continues to grow worse and bombs and fires break out. Therefore, Howl goes out and fights while Sophie protects the castle, breaking her curse in the process, but leaving her hair silver. When Sophie insists that Calcifer moves the castle close to Howl, the castle begins to fall apart and Sophie finds herself in a flashback of Howl's childhood. There, she realizes that Howl bound himself to Calcifer by giving him his heart to keep him from dying (a side effect of which involved emotionally trapping him in adolescence).

Returning to find Markl, Heen, Turnip Head and the Witch of the Waste, Sophie was returns Howl's heart, and Calcifer is consequently set free. Then, when Turnip Head saves them from falling off a cliff, Sophie gives him a kiss, when it is revealed to be the neighboring prince from the country in which Sophie's country is having a war with. Finally, Howl awakens and Sophie finally reveals that she loves him and that he loves her. The prince returns to his home country, and Sullivan decides to end the war, having witnessed all the events from a crystal ball. The film ends with Howl and Sophie flying in a newly built castle and lovingly kissing. 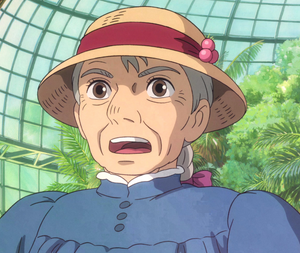 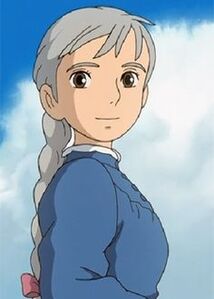 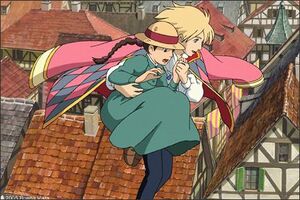 Howl and Sophie on the sky walking and flying 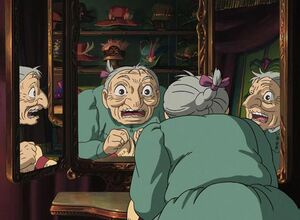 Sophie- after being cursed by the Witch of The Waste 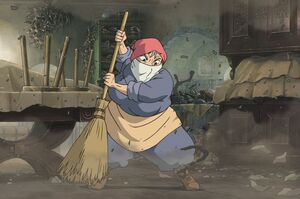 Sophie working as a "cleaning lady" 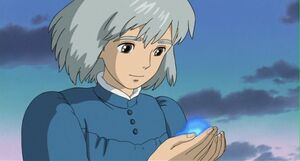 Retrieved from "https://hero.fandom.com/wiki/Sophie_Hatter?oldid=2027554"
Community content is available under CC-BY-SA unless otherwise noted.