Survive the Zombie outbreak and be with Rogan (succeeded).

Sophie Richards is the tritagonist in the first The House of the Dead game. She is a researcher of the DBR Corporation, and the fiancé of Thomas Rogan during the events of the Curien Mansion incident.

While the player's performance would determine her survival in the first game, canonically she survived, married, and had a daughter with Rogan, whom they named Lisa Rogan.

Engaged to Thomas Rogan and acquainted with his partner Agent G, Sophie was worked as a researcher for the DBR Corporation under Dr. Curien. When Curien is usually unleashed his creations throughout his mansion, which resulted in the death of many of his staff, that Sophie immediately called Rogan for help.

When the agents arrived, they found Sophie lying unconconscious in the mansion's front courtyard, but she was actually playing dead to avoid detection until help had arrived. But as soon as she dropped the act upon seeing them, she was captured by The Hangedman. Fighting their way inside, the two agents managed to sought her, but were suddenly ambushed by The Chariot before they could take her to safety, upon which the creature attacked and gravely injured Sophie. After killing the monster, Rogan and G attend to her, who tells them to go on and stop Curien to prevent a disaster. However, she passes out shortly afterward, much to Rogan's grief.

After Rogan and G accomplish their mission in risking, with Curien and the Magician subdued, Rogan bids Sophie a heartbroken farewell before taking his leave. The player's score at the end of the game would determine Sophie's fate. The Neutral Ending would simply have the player look back at the mansion, leaving players to wonder whether Sophie had lived or died. The Bad Ending takes the player back inside the mansion, where Sophie is shown standing jaded as a reanimated zombie. In the game's canonical Good Ending, Sophie is instead shown miraculously alive and well, running toward the screen, exclaiming, "Thank you!"

After the events of the first game, Sophie married Rogan and gave birth to their daughter, Lisa.

In 2019, civilization had collapsed after a 2003 outbreak staged by Curien's financier, Caleb Goldman. Hoping to find the source of humanity's downfall, a now-retired Rogan led a team of military commandos into the EFI Research Facility. His team was overwhelmed by the undead, and Rogan went missing. Sophie worried for his safety; her daughter promised to find Rogan and bring him home.

While Sophie never appears, she is mentioned by Lisa, who claims that Rogan always put work ahead of his family; it is implied that Lisa has a much closer relationship with her mother. 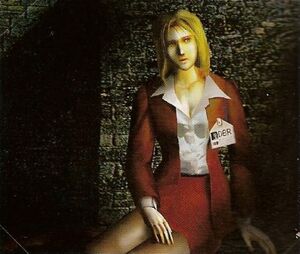 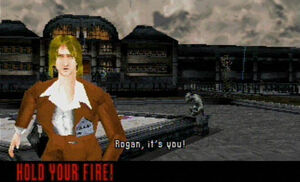 Sophie about to be attacked by zombies in the arcade's opening. 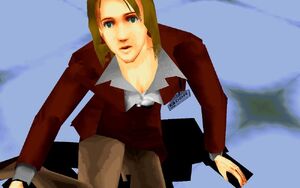 Sophie as a zombie during the "bad" ending of The House of the Dead.

Sophie, very much alive in the "Good" ending of The House of the Dead. 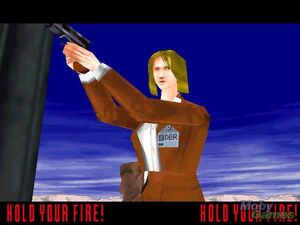 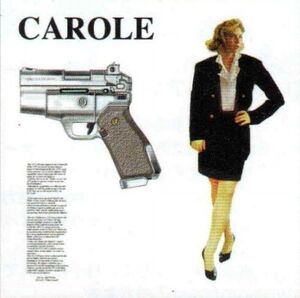 Early draft of Sophie Richards as "Carole" from The House of the Dead. 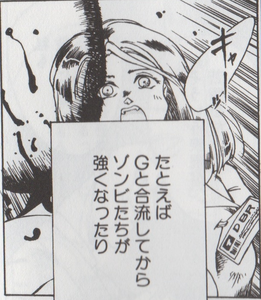 Sophie in The House of the Dead Manga "PUMPS". 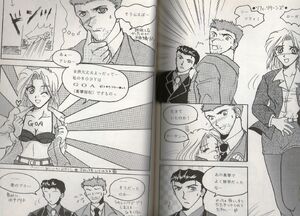 Sophie in The House of the Dead Manga "Wilder than Heaven".
Add a photo to this gallery

Retrieved from "https://hero.fandom.com/wiki/Sophie_Richards?oldid=2227245"
Community content is available under CC-BY-SA unless otherwise noted.